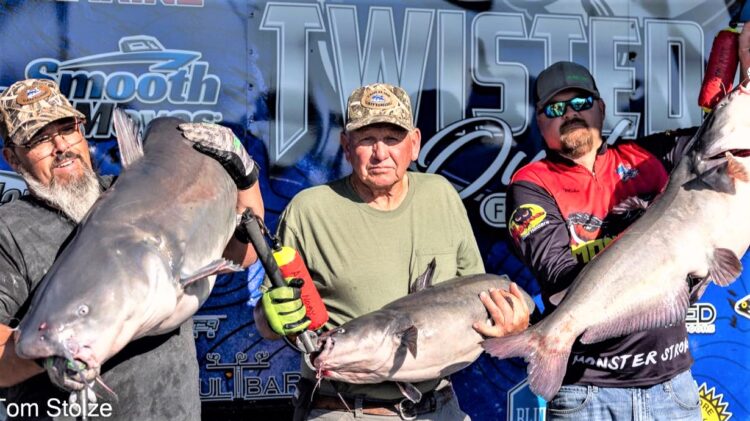 Big Fish of the tournament weighs in at 80.70 pounds, a new personal best for the lucky anger.

The Mississippi River normally produces some nice fish and it did not disappoint. Anglers were allowed three fish with no length restrictions. It took more than 140 pounds to win. 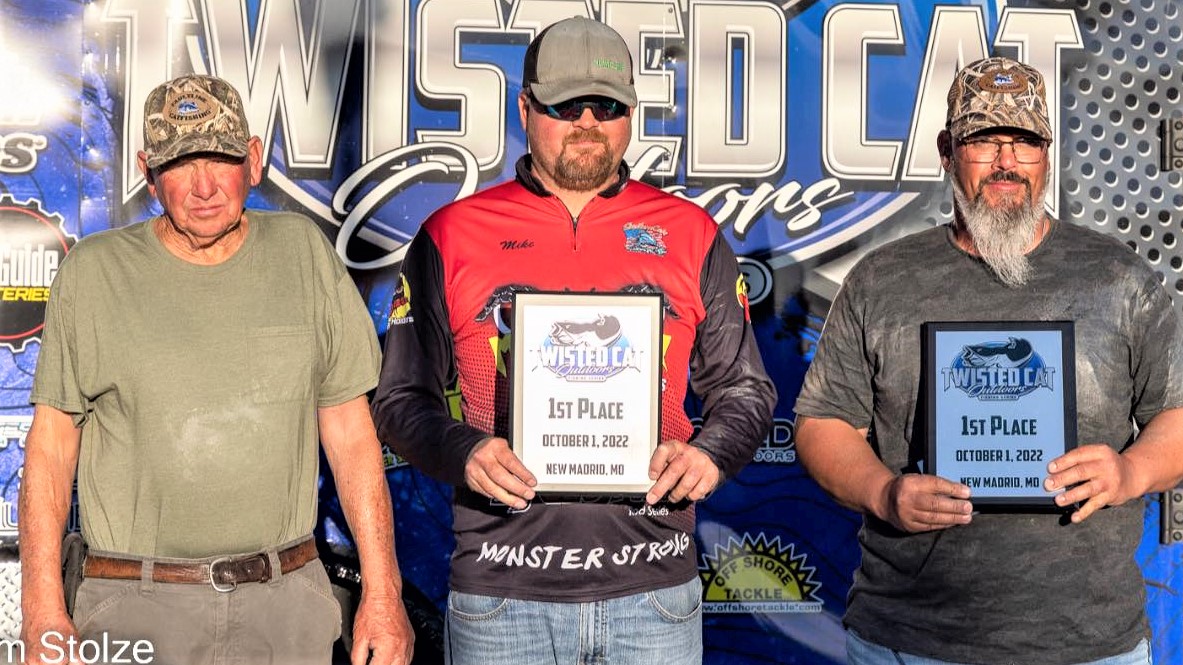 (Tom Stolze Photo)
Jimmy Burton, John Troutt, and Mike Mitchell bumped and anchored their way to the win at the Twisted Cats event in New Madrid. They brought a 3-fish limit to the scales that weighed a whopping 143.77 pounds. Their bag included the Second Big Fish at 77.68 pounds.

“Jimmy and John went out and scanned water the day before the tournament,” reported Mitchell. “Jimmy and I went out last Friday before the Cabela’s King Kat event and found the area we targeted for this tournament. We used it as a backup spot that paid off since we didn’t catch a fish until about 11:30.”

“We had found fish on rock bank that had lots of structure,” recalled Burton. “It was marking good fish so the plan was to work that area bumping baits.”

The team began bumping at about 1.0 to 1.2 mph. They continued to mark fish but the fish weren’t having a thing to do with their baits so they changed their strategy.

“We thought with the low water and cooler nights we would slow down more,” explained Burton. “We slowed the boat down to .3 to .5 mph and still no strikes. About 11 am we decided to change up and go anchor on some fish that we had scanned in a hole.”

It only took about 12 minutes until they had a big takedown. It was their biggest fish of the day at 77 pounds. They put the big fish in the livewell and continued to fish for another 20 minutes before deciding to run over to a grain elevator hoping to catch and cull a couple more before time ran out.

“With no strikes at the granary, we went back to the big fish hole,” offered Burton. “With about 45 minutes left we anchored up again. About 7 minutes in a rod goes down. It was our second biggest fish of the day, a little over 40 pounds. Nine minutes later another rod goes down with our 3rd fish driving our total weight to 143.77 pounds.”

“It just goes to show you that when you are down you can’t quit,” concluded Burton. “Just keep positive and keep pushing for that bite!” 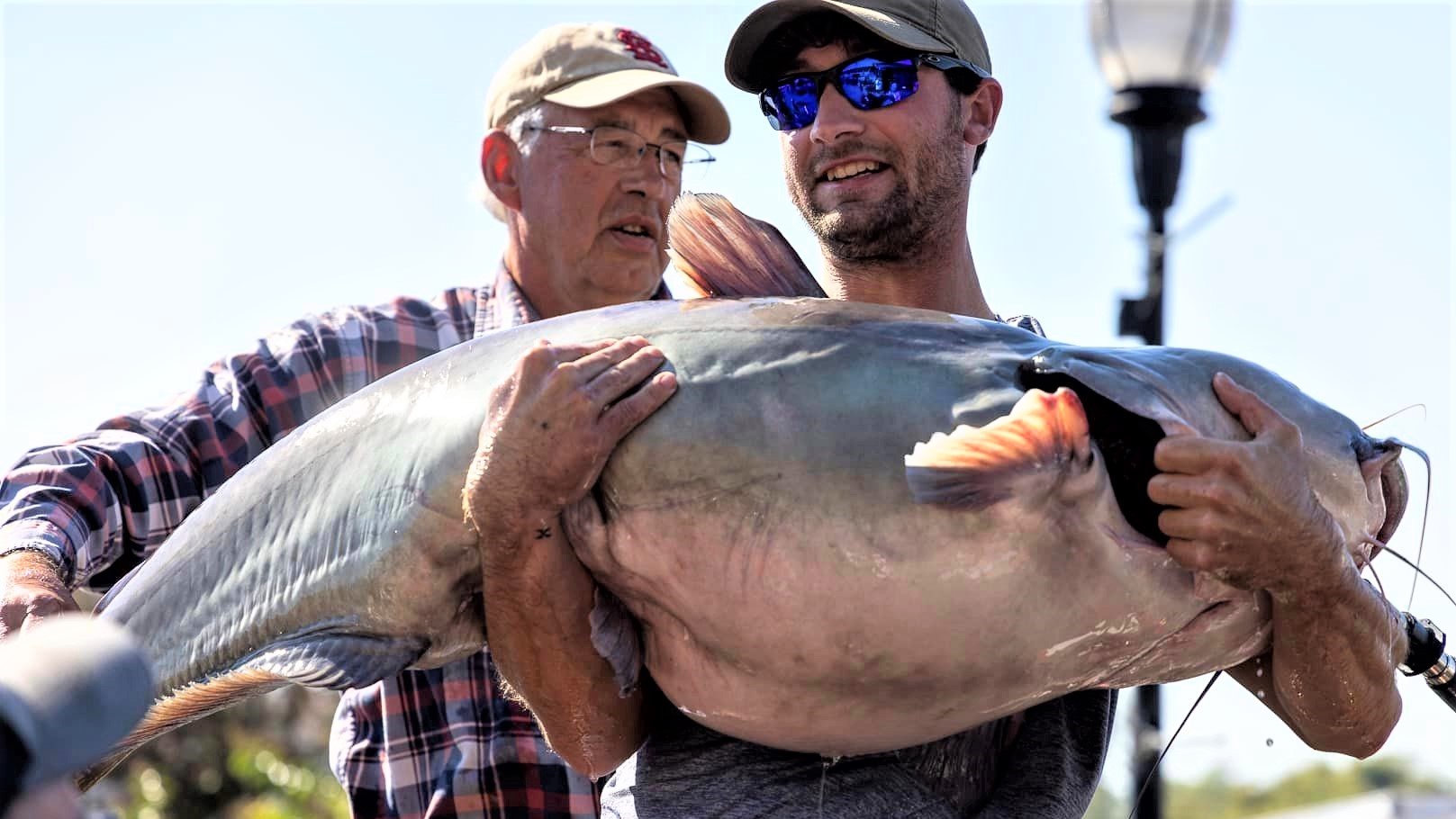 (Tom Stolze Photo)
The runner-up spot went to local anglers, Clint Tanner and Bill Tanner. They live in New Madrid and won the event in 2019. They brought a total weight of 129.31 pounds to the scales to claim the second spot. Their bag included Big Fish of the tournament at a weight of 80.70 pounds. The big blue was also Clint’s personal best.

The father/son team got things going the day before the tournament when Bill went looking for a few fresh skipjacks. The skipjack bite wasn’t that great but he caught 3 or 4 and did a little scouting.

“As most everyone knows the river is EXTREMELY LOW,” reported Clint. “Most of the normal areas we like to fish in the fall are too shallow or the current moved out with the river. When dad was idling back from bait fishing he ran across a really big drop from 28 to 45 feet. It had fish stacked all around it with some scattered down on the deep flat. There was wood cover and food fairly close. It was like a catfish hotel.”

They caught two fish really quick as they bumped through them. Both fish weighed about 20 pounds. They decided to anchor on the same fish and sat there for a couple of hours trying to make something happen.

“About noon we decided to go try a big anchor hole that usually holds fish year around,” Clint said. “But with the low water, we knew the current was going to be very light if there was any at all.”

No sooner than the team got the poles cast out Clint caught a 3- to 4-pound yellow cat. It was the only bite they had until about 12:50 pm. At this point, they guessed that they had a weight of about 51 to 52 pounds.

During that long anchor set Bill said, “Ya know when I was skipjack fishing yesterday it looked like maybe a few fish on a little flat dike. Let’s go try it.”

A little after 1:00 pm Clint and Bill pulled up to the dike where they spot-locked in the seam of the wing dike. They didn’t see much activity on the graph but started fan-casting rods and placing them in the rod holders.

“I get to our 6th anchoring rod and the line was broke,” recalled Clint. “So I just grabbed my light bumping rod, baited with a skipjack head, and pitched it out on the slack water side of the seam.”

After sitting there about 10 minutes the 7.5-foot Denali Heavy, with a 6500 Abu line counter reel doubles over with the drag screaming. The fight was on!

The small rod is insufficient to do much with the big fish. Clint can hardly move it at all. Finally, the tail comes up behind the boat and Bill recognizes how big it is and guesses it might go about 45 pounds.

“Then the rest of the fish kept coming out of the water,” explained Clint. “Then, at the same time, we both say, ‘that fish is way bigger than 40.’ When we got the fish in the boat it just seemed to be getting bigger.”

When Clint finally rolled him into the livewell the lid wouldn’t t shut. Clint and Bill realized that they would have to head on to weigh-in or the fish wasn’t going to make it laying on its side.

“We reeled in and headed for the scales,” concluded Clint. “We only had a 5-minute boat ride but didn’t want to chance a fish that size!”

Epilogue:
The tournament is held in conjunction with the New Madrid Fall Festival which includes all kinds of events for kids and families. It also has one of the best crowds at any catfish tournament as the locals come out in numbers to see big fish and cheer the anglers on.

Jason and Daryl Masingale are regular competitors at New Madrid. A few days before the tournament they posted on social media, “Looking forward to this tournament. The crowd at New Madrid is awesome!!”