KingKat on the Missouri River at Kansas City, KS—How They Fished 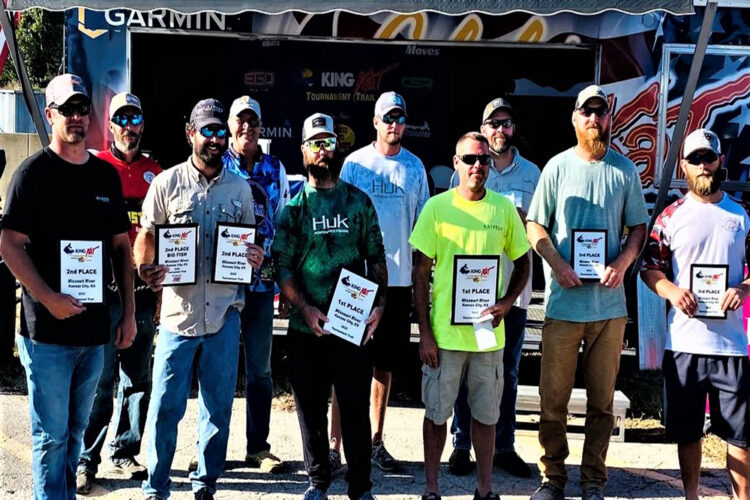 A captains meeting and registration was held at 5:00 pm followed by the captains meeting at 6:00 pm at the Hilton Garden Inn, 520 Minnesota Ave, Kansas City, KS. The original boundaries were extended to new north and south boundaries. It was a trailering event and anglers could fish anywhere between the Independence Ramp on the north and the Waverly Ramp on the south. Anglers were required to be back at the weigh-in ramp at Kaw Point Park by 4:00 pm on tournament day.

Fifty-four anglers representing 6 different states competed for a purse that totaled more than $10,000 in the October 1, 2022 event. The weigh-in took place at Kaw Point Park where it took a three-fish weight of more than 115 pounds to win.

The Missouri River gave up 115.99 pounds to DJ Meredith and James Jackson who claimed the top spot at Kansas City. The 3-fish weight earned the Missouri anglers a check for $5,000. 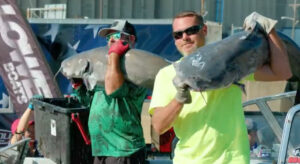 Like many other competitors in the event, Meredith and Jackson chose bumping as their primary method of fishing but ended up on anchor too. They fished south of Kaw Park in water that ranged from 17 to 25 feet deep.

Common carp is prevalent in the Missouri River and that is what Meredith and Jackson chose to catch their winning bag.

The morning hours produced one of their biggest fish. Then they took a lunch break. During their break, they decided to cast some baits out and they caught another nice blue.

They were cooking brats for lunch and joked that they would continue to include brats in their future fishing trips.

Meredith and Jackson took the hot seats following their weigh-in early in the competition. They watched as the remaining teams came to the scales, but no one got closer to them than 5 pounds.

The runner-up spot and a check for $2,500 went to Joel Roberts and Justin Claar. They brought a bag weighing 110.10 to the scales to earn second place. They were just 5 pounds out of the lead. Their bag included the Jenko Fishing Second Big Fish of the tournament to add $500 to their payday. It weighed 68.67 pounds.

“We pulled up to our first spot and started bumping,” recalled Claar. “Joel caught our first fish which was just over 20 pounds, pretty quickly. About an hour later we were about to give up on that stretch and our big fish hit and started peeling drag.”

Roberts shut the trolling motor off so the team could drift faster toward the fish. After a pretty lengthy battle around the boat, they finally got a good look at the fish and knew they had a good one.

“Shortly after seeing the fish it was in the net,” Claar said. “With the big fish in the boat, our morale was boosted. We went back above that spot and started bumping again.”

An hour and a half later the team gave up on the area and decided to go scan other areas to find more fish. They went downriver about a half-mile or so where they marked two fish.

“We backed up and started bumping again,” stated Claar. “And bam, another fish just over 20 pounds. We got started yet again and smack—another one just over 20!”

Then their new bite shut off and they began the hunt all over again. They were looking for one more good fish. They fished another 3 hours before they got another bite on an anchor set. It was only 12 pounds and not enough to help them cull.

“We continued hoping to find that one more bite but it just never came,” concluded Claar. “With a 3-fish limit, we felt confident that we were sitting pretty good. We were just shy of the win again but happy to finish in 2nd place for the second year in a row.  All in all, it was a great day of fishing. The icing on the cake was that we were in the Cabela’s King Kat Tournament!”

Craig Norris teamed up with Nick Foster to claim the third place spot. The team brought 2 fish to the scales weighing 93.70 pounds to earn a check for $1,500.

“We started our day anchor fishing wingtips,” reported Norris. “After not getting any action for an hour and a half we moved to the channel side. We were in 15 feet of water when we boated our first fish at about 6:00 am. It weighed 64 pounds and it came from heavy structure.”

Norris and Foster fished another 4 hours before catching their second fish, a 20-pounder. All of their fish came off fresh-cut shad fished on Big Cat Fever rods.

“I can’t wait to get to Tuttle Creek and use my Parks Planner Boards next weekend,” concluded Norris.

Christopher Thompson and Daniel Mayer teamed up to earn the 4th place check of $1,000. They brought a 80.45-pound bag to the scales at KAW Point to claim their spot.

Mayer reported a long day and a tough bite. He thanked King Kat for running an improved tournament series saying, “We had a great time fishing.” 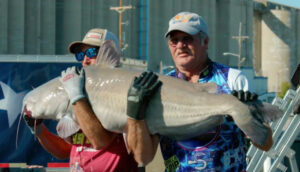 The Anvil Rods Big Kat award went to Terry Hathaway and John Berglund. They earned a check for $1,000. The 78.64-pound blue is Berglund’s new personal best. The team finished in 5th place overall.

The next and final regular season event for the 2022 KingKat Trail is scheduled for October 8, 2022, at Manhattan, KS, and Tuttle Creek Lake. Fishable waters for the Manhattan event include all of Tuttle Creek Lake. Following Tuttle Creek will be the season-ending KingKat Classic on the Tennessee River at Decatur, AL.