KingKat on Tuttle Creek at Manhattan, KS — How They Fished 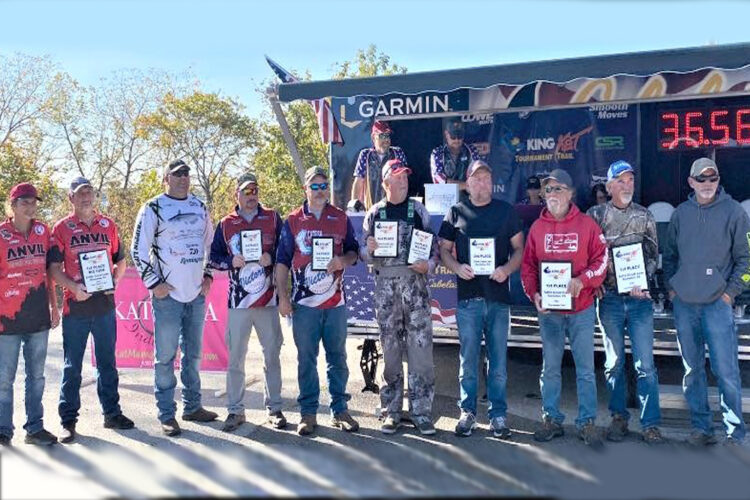 A captains meeting and registration were held from 5:00 pm to 6:00 pm at the 4 Points Sheraton, 530 Richards Dr, Manhattan, KS. Anglers could fish all of Tuttle Creek Lake. Anglers were required to be back at the weigh-in ramp at Tuttle Creek Marina by 4:00 pm.

Fifty-eight anglers representing 6 different states competed for a purse that totaled more than $11,500 in the October 8, 2022 event. The weigh-in took place at Tuttle Creek Marina where it took a three-fish weigh-in would determine the winners.

A cold front moved in prior to the tournament and made for a tough bite on Tuttle Creek. Anglers were met with a cold and foggy morning to begin the event. When all the weights were tallied a local Kansas team came out on top. 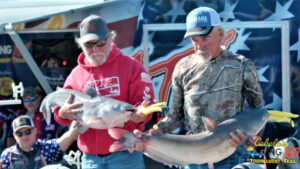 The top spot on Tuttle Creek went to the team of Ricky Dodd and Tom Northrop. They teamed up to bring 53.21 pounds to the scale and claim first place and earn a check for $5,000.

Northup and Dodd started out in a thick fog. Temperatures had dropped because to the cold front but they were able to bring in a 3-fish limit of 2 overs and 1 under to the scales.

“It was so foggy in places I couldn’t even see the trolling motor on front of the boat,” reported Dodd. “That fog hung around till probably 9:00 am.”

“We didn’t prefish,” continued Dodd, “But Tom had found some fish earlier in the month. With the cooler water temps and the big cold front that just went through we pulled baits slowly at .5 to .6 mph catching some fish in the early morning fog. We used cut bait from crappie, carp, and white bass. We fished all day in water that ranged from 11 to 15 feet deep.”

They reported that the fishing just got tougher as the day went on. They still caught some smaller fish but none good enough to cull what they had. They caught 7 fish on the day—3 fish over 30 pounds and 4 under.

“I’d like to thank my wife of 43 years for supporting me in whatever I do,” concluded Dodd. “Tom and I would like to thank KingKat for putting on a great tournament!”

The runner-up spot went to Devin Fouts and Bob Eaton who were just 2.13 pounds behind the leaders. The Nebraska anglers brought a total weight of 51.08 pounds to the scales to earn the second place check of $2,500. Their bag included Second Big Kat at 22.64 pounds to add $500 to their payday from Jenko Fishing.

Eaton and Fouts did a lot of scouting during prefishing. They established a strategy, stuck with it, and it paid off. The team netted shad the day before the tournament. Fouts made one cast and netted more than 300 shad to set them up in bait.

“We pulled baits slowly in 16-18 feet of water,” reported Eaton. “We were fishing in a cold front which made for a tough bite. All our fish were caught on fresh shad from the day before. We lost to two of the locals that fish there all the time.”

“Cabela’s King Kat is a first class circuit,” stated Eaton in a Facebook post. “It was very professionally ran. The win qualified us for the National KingKat Championship on Lake Wheeler in Alabama in three weeks.”

The tough bite caused Studebaker and Collings to fish several different methods. At the weigh-in they told KingKat owner Bob Denen that they did some dragging, wind drifting, anchor fishing, and vertical fishing during the day. They attributed the tough bite to the cold front that came in.

Darrin Meske and James Berroth, both from Kansas, were in the money with a total weight of 36.99 pounds. They earned a check for $1,000. 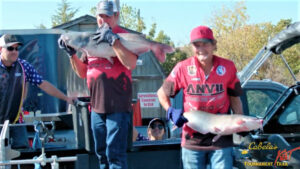 The Anvil Rods Big Kat award went to Donnie and Lonnie Fountain from Georgia. They had a total weight of 35.17 pounds which included the Big Kat of the tournament at 24.48 pounds. They earned a check for $1,000.

Lonnie and Donnie praised the KingKat tournament trail for efforts made to bring the trail back to its previous stature.

“Bob and his team have gone above and beyond to bring this trail back to life,” Donnie said. “Lonnie and I had a great time competing in this year’s points race. It came down to the last event. We want to congratulate the Westbrooks for pulling it off. They are definitely a class act and a great fisherman and fisherwomen.”

Team Fountain concluded by thanking their sponsors who support them on the trail. They include Dry Creek Marine, Driftmaster Rod Holders, B-K Boards, and Anvil Rods.

As the last regular season event, Angler of the Year (AOY) and the Overall Points Champion were decided at the Manhattan event. It was a very close race with several team in the running. The awards will be made official at the Classic on Wheeler Lake.

This year’s AOY Team was regular trail competitors, Joe and Demetria Westbrook. They finished in 5th place in the tournament with 36.56 pounds which was sufficient to give them the title. They received a fully equipped Lowe Boat powered by a Mercury Outboard valued at $45,000.

The next and final event for the 2022 KingKat Trail is the KingKat Classic with money and prizes valued at more than $90,000!

The 2022 Bass Pro Shops/Cabela’s KingKat Classic will be held on the Tennessee River out of Decatur, AL. Anglers will be launching at Ingalls Harbor on Wheeler Lake. Winners at Decatur will win a fully rigged Lowe Boat powered by Mercury.