Catfish on the Surface 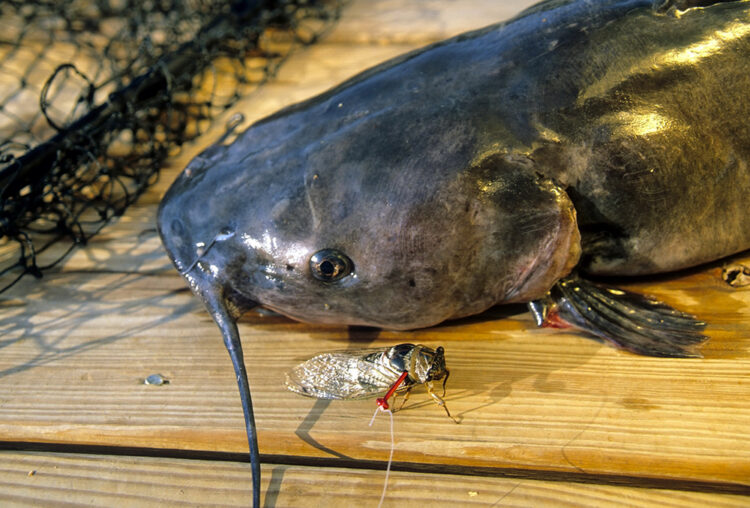 Cicadas are very large insects, a fact that makes them a desirable food source for catfish, particularly in summer when these insects are abundant.

If you were to bump into one of your friends every time you visited a particular restaurant, you might start believing that’s the only place your friend ever eats. That’s not likely to be true, of course, but it might seem so nevertheless.

A similar situation exists between catfish and catfish anglers. Because we usually find catfish feeding on the bottom of our favorite lake, river or pond, we have a tendency to think they always feed on bottom. This is a common misconception. In reality, catfish often feed at mid-depths, and if concentrations of nutritious foods can be found in surface strata, these whiskered warriors will actually feed right on top. Just ask any aquaculture operation owner who feeds his fish on floating catfish chow from the farm supply store. Hundreds of whiskered mouths will rise without hesitation to feed on the surface any time the food is distributed.

Two natural foods that encourage a topwater bite are grasshoppers and cicadas. I’ve watched catfish slurping them from the surface on many calm summer mornings, evenings and nights. Other insects are eaten as well: mayflies, moths, caddis larvae and hellgrammites, for example. But these miniscule offerings don’t seem to appeal to larger cats the way a big buzzing cicada or fat grasshopper does.

Cicadas, sometimes called locusts, spend most of their lives underground—up to 17 years in some cases. When they emerge, they climb onto trees, shed their familiar shells and start making the weird, high-pitched noises we all associate with summer. It’s often tough to obtain them for bait, but on rare years, when several year classes of cicadas emerge at once, thousands may cover the trees, making it much easier to find and catch them. All you need is a cricket cage to stuff them in, and some youngsters who think bait catching is as much fun as fishing.

During one such year here in my native Mid-South, the strange noises made by millions of cicadas filled the air with a steady hum, and the cicadas themselves filled the bellies of many catfish I caught. While fishing on a small lake, my father-in-law and I watched as dozens of catfish—some of them quite large—rose to the surface to pick off cicadas that had taken a dip in the water and were buzzing furiously as they tried to get airborne again. A trip to the trees edging the bank provided plenty for bait.

Our rigs were simple. We hooked each cicada through the hard shell on its back with a 3/0 octopus hook. Then we flipped it out onto the water’s surface with no weight, bobber or other terminal tackle. Within seconds of each cast, we’d be playing a nice channel cat—and occasionally a blue cat—that rose to take the insect offering.

The next month, while fishing with a veteran catfisherman on Missouri’s Osage River, I tried unsuccessfully to coax him into using cicadas for bait. He refused, thinking it nothing more than folly.

When we pulled into the boat ramp eight hours later, having caught no catfish, we were greeted by one of the man’s friends who had been far more successful.

“How’d you catch those?” the cat man asked, eyeballing the pile of 5- to 20-pound channels and blues in his friend’s boat.

“On cicadas,” his friend answered. “I wasn’t getting a bite on regular baits, but every time a cicada buzzed down and hit the water, a big cat would gobble it up. So, I caught some and put ‘em on a hook. Caught a cat on every cast. Never knew till today you could catch a cat on a topwater bait. And boy is it fun!”

Because grasshoppers stay in grassy areas, not trees, they’re much easier to catch than cicadas. And you don’t have to wait till that special year to find an abundance. I’ve often pulled my boat up to a grassy margin on a river and caught several dozen. Big katydids work great, too, so add them to your bait cage with the hoppers whenever you see them.

A good trick an uncle taught me is to spread an old flannel blanket across the grass and then wade through the tall vegetation and drive the hoppers to it. Their feet will stick in the fabric like Velcro. A fine-mesh insect net, available at many pet stores or through online markets, works very well, too.

One of my longtime catfishing buddies likes to drift grasshoppers beneath a float on some of the Ozark streams he fishes. In my experience, they work equally well on the surface, at mid-depths or on the bottom. For real fun, though, fish them on top. When you see the wake made by a big catfish heading toward your bait, then see that fish’s broad whiskered mouth breach the surface as it strikes, you’ll feel an adrenaline rush that can be addictive.

One of my catfishing uncles taught me another trick that never fails. Secure a big grasshopper to a 1/0 or 2/0 gold Aberdeen crappie hook with a small rubber band—the kind used to secure little girls’ hair braids. Then flip the bait out beside a log or stump using a fly rod. You’ll see every vicious strike and enjoy a rod-bending battle with each hungry cat. Catfishing was never more fun!