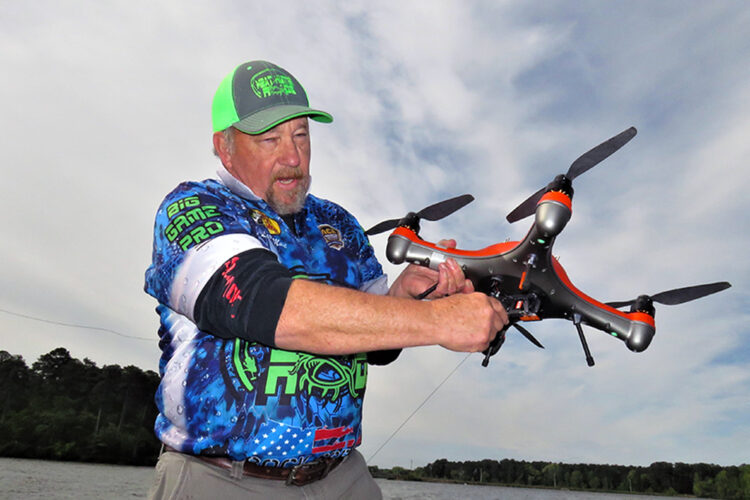 Fish Where the Fish Are

Drones may be just the ticket for presenting bait to big catfish in shallow water without spooking them!

Fish where the fish are is a phrase often heard in catfish circles. Different seasons, different temperatures, current or no current, and many other conditions tend to move fish from one location to another. That catfish behavior is important for anglers to recognize and plan accordingly. When conditions are such that the fish are shallow it presents a challenge to anglers because getting close enough to the fish without spooking them is tough.

David Shipman and Larry Muse tried a unique solution to the problem in a tournament they were fishing below a dam on the Tennessee Tombigbee Waterway. There were fish up near the dam that could be seen in 8 feet of water from an observation deck at the dam. But you couldn’t get a boat within 800 feet of them. David Shipman had the idea to use a remote boat to carry the bait to the fish.

“We couldn’t get close to the dam,” reported Muse. “They had the floodgates open and boaters had to stay behind a buoy line. David had a little remote control boat to carry the bait up to the fish. He could attach the bait to the boat and run it the 800 feet to the fish. The remote boat had a release mechanism for dropping the bait. Once the bait was dropped he guided the small boat back to us.”

So Muse and Shipman were sending bait almost 300 yards to undisturbed fish that had been observed feeding and they were eager to bite. The two anglers use balloons for floats on their rigs and used binoculars to see the floats.

“We used balloons so we could see where the bait was,” explained Muse. “We blew them up pretty big so we could see them through binoculars. Within 15 seconds from the time David dropped that bait you had a fish on. Those fish weren’t spooky at all because nobody was going up there to bother them.”

Unfortunately, the current made it difficult to reel in the fish as it helped them swim to some underwater structure. The fish would get hung up in the structure and couldn’t be brought back to the boat.

“We tried to move over and put our bait in up the side where we could get the fish out around that structure,” recalled Muse. “Somehow we managed to get the prop on the model boat tangled in some old line and the boat sunk.”

Nevertheless, Muse and Shipman had a good day with their unique approach. They finished in third place behind local favorite Joey Pounders who was on his home waters and hard to beat.

“We would have beat Joey if we hadn’t sunk our little boat,” joked Muse. “We ended up within about 6 pounds of him anyway.”

That experience with the remote control boat lingered in Muse’s mind following the tournament. The whole idea was wrapped around the notion of presenting bait to undisturbed fish in shallow water. After the remote control boat sunk the next best option was using balloons being pushed by the wind to float the bait to its final destination but that was not as effective as the remote boat had been.

Muse continued to think about the problem. How could he present bait to fish in shallow water without disturbing them?

“I worked on that problem in my mind,” Muse said. “First I thought about taking my bow and arrow and making a cup for the end and putting my bait in the cup. Then I would fire that thing up there and when it hit the bait would fall out in the area I wanted to fish. I would put some foam on the arrow to make it float. The more I thought about that, and the fact that 800 feet is a long way—I finally gave up on it.”

Next, he started thinking about flying the bait up to the shallow water fish. He was familiar with anglers using drones to send bait out long distances in the ocean.

With the help of Google, Muse found a waterproof fishing drone (SwellPro). It went beyond his expectations. He rigged it with a camera and uses a set of goggles with a viewing screen where the operator can see where the drone is going. The operator can also record the flight if desired.

“I put a couple of thousand dollars in it,” mused Muse. “But I figured that was better than sinking three or four $800 boats.”

We had a pretty good wind on the day we launched Muse’s drone. He picked a spot on a north bank where he could fly with the wind towards a shallow flat. He wanted to rig the drone and fly the bait to the target where he would drop it with the least disturbance to the fish.

It was pure experimentation from that point on. Muse explained the mechanics of the drone and how he planned to fasten the baited hook to the release mechanism. After several test flights with a few variations made along the way, he was ready to send a baited hook to the flat.

Muse’s terminal tackle started with a bead and a sinker slide. A pool noodle was attached to the slide and used as a float which could be set to the desired depth. A barrel sinker above a chain swivel and a hook drop with a Boss Kat circle hook completed the rig.

He made a few practice runs launching the drone and flying it to the shallow flat and back without the hook attached. The next step was to open the bail, bait the hook, attach the baited hook to the drone’s release mechanism, and fly it to the target.

Once the drone delivered the bait Muse flew it back to the SeaArk and captured it by hand. Alternatively, the drone can be flown back and landed in the water alongside the boat.

Trial and error indicated that the best way to fasten the rig to the drone was to bait the circle hook and attach the bend of the hook to the release mechanism. That left the mainline hanging down and arching smoothly back to the rod.

At this point it is much easier to have someone help with the flight. As one angler holds the rod and controls the line as it leaves the spool, the pilot can concentrate on flying the drone to the intended target.

Several baits were dropped successfully on the trial trip. A perfect ending to the experiment would have been to catch a fish on the maiden voyage of the drone, but it wasn’t to be. Nevertheless, the experiment was a success and Muse was happy with the results.

“There’s no doubt that the drone technique will work,” concluded Muse. “I may do some more tweaking, but being able to get the bait out there in shallow areas without the fish knowing you’re around is invaluable. It has got to be an advantage when the fish are feeding shallow.”