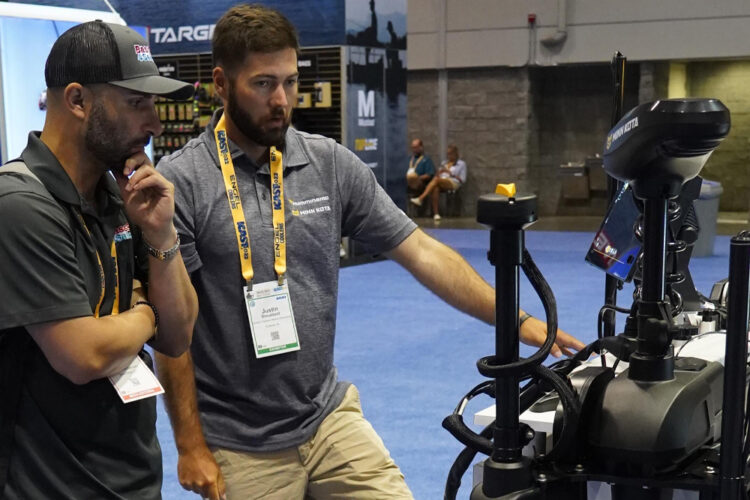 Lock on, fish on with the new MEGA LIVE Imaging TargetLock with a push of a button.  (Brad Wiegmann Photo)

Technology can be expensive.

Ready, set, spend! If you are like so many other anglers caught up in having the best and newest sonar get ready to shell out some serious coin. All three major marine electronics companies have new and improved products for anglers to purchase.

For angler wanting to fish open water Garmin with a range of 500 foot in freshwater Garmin offers the LiveScope XR, however, the majority of crappie anglers will not be purchasing these sonar transducer.

Lowrance like Humminbird continues with new products to integrate their brand trolling motor with existing same brand fish finder.  Ghost 360 rolled out at the start of the year and was followed up with something you rarely see from any company. An upgrade of product for free. That’s right, Lowrance actually sent out new upgraded Active Imaging 3-in-1 nose cones to replace the outdated nose cones.

Ghost 360 software when paired with the Active Imaging 3-in-1 nose cone that retails at $337.99 allows compatible multi-function displays to show a high resolution 360-degree image around the boat. Only the Elite FS, HDS Carbon and HDS LIVE units are compatible with this upgrade. Note that the trolling functions are disengaged when Ghost 360 is scanning.

Humminbird electronics continue with the One-Boat Network concept revealing the Humminbird MEGA Live Imaging TargetLock retailing at $2,999.99. This product when revealed in July at ICAST 2022 won the Best in Show for the electronics category.

The ability of a separate transducer pole is not a new concept, however, this is the first for a product to be introduced by a major marine electronics company.