Record Blue Caught on the Cumberland 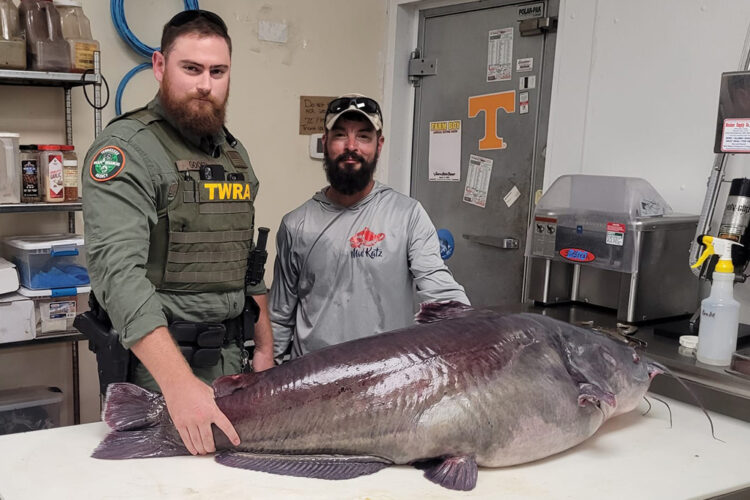 Editor’s Note: Since the publication of this story, the certification process has been completed and Micka Burkhart is the official Tennessee record holder for the 118.7-pound blue catfish he caught on the Cumberland River, on Sept. 24, 2022.

STEWART COUNTY, Tenn. – “When I woke up (that day) I figured it would just be another day on the water.”

Those are the words of Micka Burkhart, an avid catfish angler from Big Rock, Tenn., not far from the Kentucky border and the Cumberland River. As it turned out, Sept. 24, 2022, was ANYTHING but “another day on the water” for Micka and his wife, Amy.

Burkhart succeeded in catching what will likely be certified as the new Tennessee State Record Blue Catfish. The huge fish weighed in at 118.7 pounds on certified scales, with multiple witnesses – including Tennessee Wildlife Resources Agency (TWRA) Officer Dalton Gooch.

The current state record blue catfish was caught in 1998 by Robert Lewis and weighed 112 pounds. Both Lewis’s fish, and Burkhart’s probable new state record, were caught on the Cumberland River.

ON A DATE WITH HIS WIFE

Burkhart said catching a probable state record catfish was special, of course. But he said it was extra special since his wife was along.

“We don’t get to fish together a whole lot,” said Burkhart. “This was kind of like a date. In fact, that morning she made a joke saying, ‘Every time we go on a date, somehow or another your friends get involved.’ I told her, ‘Nope, today it’s just you and me on the river.”

As it turned out, Amy was correct. In the end, a crowd of friends, family and spectators showed up at the boat ramp when word spread of Burkhart’s probable new state record. Getting the huge fish weighed and certified, however, proved to be an arduous task – especially since Burkhart insisted that he wanted to keep the huge fish alive and return it to the river.

At this writing, TWRA fisheries officials are waiting on the original State Record Application to arrive in the mail.

Mike Bramlett, TWRA Fisheries Biologist in the Agency’s Nashville Headquarters said, “Once we get it, and assuming everything is in order, we should be able to get it certified in two days. As far as I know everything is looking good.”

But on the day of the catch, Burkhart wasn’t sure he was going to get to submit his fish for the record.

“I almost didn’t get him certified because I didn’t want that fish to die,” said Burkhart. “I wanted to do everything in our power to release it.”

Rules demand that any state record fish must be weighed on certified scales that have been officially tested for accuracy. Those can be hard to find, especially on a weekend and on scales that can handle more than 100 pounds.

Burkhart said, “It took a while but we got in touch with him and then we just waited at the launch ramp with the fish in the livewell while he went looking for a certified scale. Just like me, he wanted to keep the fish alive, so he had to find a scale that was pretty close.”

Burkhart waited at the ramp four hours and was actually close to setting the fish free, uncertified, when Officer Gooch finally called saying he had located a certified scale at Who Dat Processing. There the certified scales proved Burkhart’s fish was 6.7 pounds heavier than the existing state record blue cat.

“It hasn’t really set in,” said Burkhart. “All my buddies are probably more excited than I am. It just really hasn’t set in for me yet.”

HOW DID HE CATCH IT?

Burkhart said he was fishing the Cumberland River near Cross Creek.

He and his wife spent the morning catching shad for bait before they began catfishing. Many trophy catfish anglers use huge baits, sometimes whole fish that weigh a half-pound or more. That was not the case for the Burkharts, however.

“All we could catch were small skipjack about six inches long,” said Burkhart. “I was using one of those cut in half so the head portion I was using was maybe three inches long.”

Burkhart said he had two rods rigged on planer boards out to the side of his boat and one long line out the back. He was slow-trolling against the current, dragging his bait on or near the bottom in 40 or 50 feet of water.

He was using a Mad Katz rod rigged with 30-pound test Berkley Trilene Big Game line and an 8/0 Gamakatsu hook.

“My buddy, Bryan Ladd, gave me a couple of Mad Katz rods about six months ago,” he said. “Now I’ve got seventeen of them. It’s really all about personal preference but I’ve used a lot of cat rods and for the feel and the fight, Mad Katz are best for me.”

Burkhart said when the huge catfish first hit the small bait dragging beneath a planer board, it acted like an average-sized fish.

“I ‘small-guyed’ it, telling my wife, ‘It feels like a decent fish but not real big,” said Burkhart. “At first it just kind of came in easily, swimming towards me a little bit. At that point I don’t believe the fish even realized it was hooked. It came to the boat pretty quick and I sort of got a look at it and knew it was a big one, but I couldn’t tell for sure how big. Then it apparently saw me and realized it was hooked. When it took off that time it nearly spooled me.”

Burkhart fishes with an iPilot trolling motor and had hit spotlock, stopping his boat from drifting in the current when the fish first hit. But when the fish took off, blazing downriver and taking line, he came off spotlock and started following the huge fish downstream.

“From there the fight was on,” said Burkhart. “At one point it went by the boat where I could see him again and knew he was nearly five feet long. I’d say it took about 45 minutes before we got him in the net.”

It took both Burkharts to lift the huge fish into the boat. It was 54 inches long with a 41-inch girth.

“I almost didn’t get him certified because I didn’t want that fish to die.” ~ Micka Burkhart, Pending Tennessee State Record Blue Catfish

He called Ladd who was fishing for catfish bait upstream. Ladd immediately took his boat out of the water and drove downstream to where the Burkhart had launched. There they weighed the fish on Ladd’s uncertified scales. That’s when they knew Burkhart had caught a likely new state record.

But one thing was still most important to Burkhart.

“I wanted to do everything in my power to keep that fish alive and release it,” he said. “I’ve caught a lot of catfish. I’ll keep those smaller fish to eat but I like to let the big ones go to catch them again another day.”

Once Officer Gooch located the certified scale, they drove the huge fish in Burkhart’s livewell and tried to work swiftly during the weighing process. Then it was straight back to the boat ramp where Burkhart and Ladd carried the fish back into the water.

“The video posted was only about two minutes long but we actually stayed in the water with that fish for nearly 30 minutes,” said Burkhart. “People actually stopped launching their boats while we stayed with it there on the boat ramp.”

Biologists say in many cases, fish that are caught and released, seemingly healthy, still die later as a result of stress. Burkhart is well aware of that.

“Sure, there is a chance he may not make it,” he said. “But we did all we could and the fish stayed strong. It never lost any of its color and he swam off healthy.”

Those in the fishing network know quite well that the popularity of fishing for trophy catfish has grown by leaps and bounds in recent years. Every waterway sees more catfish anglers. With two state records, including Burkhart’s released fish, fishing pressure on the Cumberland River is likely to grow even more.

Burkhart said, “Yes, in the long run pressure can have an impact. But I think it’s going to be several years before we see it. And if people practice catch-and-release it will help. I’ve actually seen an uptick in the number of fish I catch in the last couple of years.”

WHAT’S NEXT FOR BURKHART?

Burkhart, 43, served as a mechanic in the Army and National Guard with deployments in Bosnia, Kuwait, Kosovo, Afghanistan, Iraq and other hotspots around the globe until he was declared disabled.

“Like many, I came home with PTSD and lots of other issues,” he said.

Yet he continues working as a civilian military contractor, traveling across the country on jobs. But he says when he is home, “I’m usually on the water at least once a week, and more if I can get the time off work.”

Every catfisherman dreams of “joining the 100-pound club,” or catching a new record fish. Now that he has likely done it, what is next for Burkhart?

“It’s funny. When we got home my wife actually asked me that exact same thing,” he said.

“We catch a lot of flatheads on the Cumberland so now I’ve a new goal,” he said with a smile.

Robert Lewis’s record blue catfish has been in the record books for more than 24 years. Assuming his fish is officially certified, Burkhart’s name will likely stay there for many years to come.

But whether he’s chasing a bigger blue cat or a flathead, rest assured you will continue to see him on the river chasing the dream.