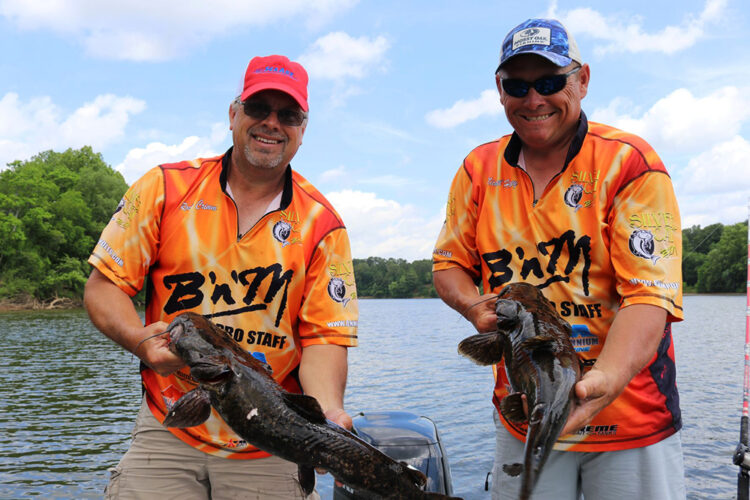 B’n’M pro staffers Rodney Crimm and Michael Haney specifically target flatheads in many river settings based largely on locations chosen and how they set up to fish those spots.

Learn how a tournament team chooses cover to fish and how they set up to coax flathead catfish out of the cover.

If the catfish had been handed a script, they couldn’t have played the part better. The cover Michael Haney and Rodney Crimm had set up to fish checked all the right boxes for river flathead catfish, and the last line was barely in place when one of the B’n’M Silver Cat Series rods plunged into a deep bend. A few minutes later the first flathead of the morning was in the boat.

Tournament partners from Mississippi who call the Yazoo River their home waters, Haney and Crimm specialize in catching river flatheads, and anytime flatheads are the primary target, their search for fish begins with a search for the best cover – usually wood cover.

On the Yazoo, they can go straight to proven spots. On less familiar waters, they’ll spend significant time riding and searching – both visually and with their electronics – before putting out a single line. We were fishing the flathead-rich waters of the Alabama River, which falls in between for this team. It’s several hours from home, but they have some history from tournaments and media events and have identified several spots where flatheads like to hold and feed.

“First, we try to find some cover that is near deep water. It doesn’t have to be in deep water, but it has to be close,” Crimm said, noting that cover spanning a range of depths can add value.

Cover usually means a downed tree or more than one tree that has fallen in the same spot, and while occasionally a small, isolated tree will yield a surprisingly big flathead, when Haney and Crimm are in search mode, they are generally looking for big, complex spread of limbs, which create eddies and offer hiding places for flatheads.

Ideal spots for flatheads are created by eddy-related cover that is swept by current, swirling currents, and seams formed downstream of the tangled timber. The flatheads hold out of the strongest current and ambush forage that gets pushed past.

Haney and Crimm use electronics to study the branch structure and bottom and to look for catfish and forage fish holding near the cover. Failing to see fish isn’t necessarily a deal breaker for fishing a piece of cover that otherwise looks good. Flatheads hold tight enough to the wood that sometimes they are difficult to distinguish even with today’s electronics. However, it is one of the factors they consider when comparing several pieces of cover and deciding where to try first.

“If we can find cover that has some fish up in the water column, we’re usually going to fish that spot because those fish will bite,” Crimm said. “Seeing bluegills around the branches also adds to a spot’s stock.”

Crimm noted that outside bends always warrant extra looking because of likely depth changes and current irregularities and because erosion commonly causes multiple trees to fall along outside bends.

Once Haney and Crimm select a spot to fish, they anchor a short cast’s distance upstream of the cover and let the boat settle in the current. They’ll then cast a spread of bottom rigs to the upstream side of the cover, landing baits just upcurrent of the specific limbs so lines sink to as close to the wood as possible. For a tree that’s along the bank, they’ll spread baits from very near the shore to the deep edge. They’ll always cast one line to the outside edge of the cover.

“Sometimes there’s a current seam there you can’t see,” Crimm said. “We tend to catch a lot from the outside edge of a tree.”

If the water beneath the boat is sufficiently deep to fish vertically, they’ll also suspend one bait on a tight-line rig to present one offering off the bottom.

Haney and Crimm vary sinker weights for bottom lines based on depth and the amount of current. It’s typically several ounces, though.

“We’re casting close to the cover and need the bait to get to the bottom quickly and stay in place,” Crimm said.

Haney and Crimm refuse to beg fish. If they don’t get bit in 15 or 20 minutes, they will move to the next spot.

“If we have our baits close to the cover, and there are fish in there that are going to eat, they’ll usually do so right away,” Crimm said. “Better to look for other pieces of cover than to waste too much time sitting and waiting.”

Haney and Crimm definitely stray from conventional flathead thought in the fact that they don’t consider live bait critical for a targeted flathead fishing approach. In fact, while they’ll sometimes include a live bluegill or another kind of live bait in a spread, they fish mostly with cut skipjack.

Most important to them is having “good bait,” according to Crimm. That means either fresh skipjack or skipjack that they personally caught and froze to ensure that it was frozen properly. They have no use for most bait shop cut bait, which they have found tends to have lost all of its attractive juice and often comes off the hook quickly.

Haney and Crimm are very intentional about how they freeze bait, putting it on ice immediately and using a freezing process that includes salting and vacuum sealing.

“If we’ve frozen the bait ourselves, it’ll bleed like it was just caught when we thaw it. I wouldn’t hesitate to fish a tournament with bait that had been in the freezer for two years,” Crimm said.