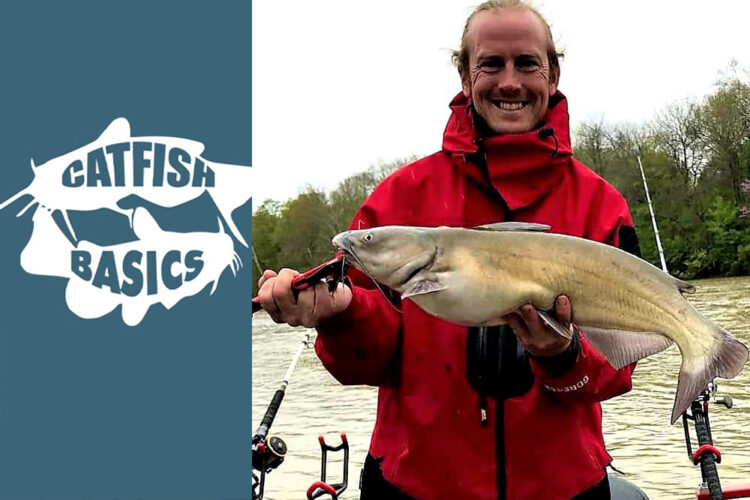 Channel cat fishing in November can be fantastic. They really live up to their name in the late fall. In reservoirs I would seek out deeper channels, looking for any current no matter how slight. On river systems, I would look for deeper flats (typically 20 to 35 feet in depth) that have slower currents.

If you are in a river that averages 20 feet deep then I would look for the deeper holes in that system—maybe 15 to 18 feet depth. These deeper holes with structure give the fish a place to hide and feed on bait coming down the river.

If the river is running really fast I’ll find channel cats in eddies, small creeks, slower tributaries, or other environments that allow them to take a break and rest from the hard current while remaining in relatively deeper water.

If the river is calm they are more likely to be cruising the slightly deeper flats just searching for food before winter comes. I continue to drift and drag from .3 to .6 mph. I run Santee Cooper rigs through December in the northern states and year-round in the southern states.

As long as the water temperature is above 40 to 45 degrees, dragging and drifting can be very productive. I feel like these fish are more spread out in November and you may only see one now and again on your graph but they will be there. It is not the same as in late summer and spring when you may see tons of fish in an area and have more confidence in catching them.

Rest assured that if you are steadily seeing decent marks on sonar, toward the bottom in an easy-going current, you will probably catch some of these tasty and hard-fighting fish.

Editor’s note: Zachariah Stelting is the director for Central Ohio Catfish Tournaments. Follow the tournament activities on their Facebook page of the same name. He also has a YouTube channel called Catfishing with Zac.