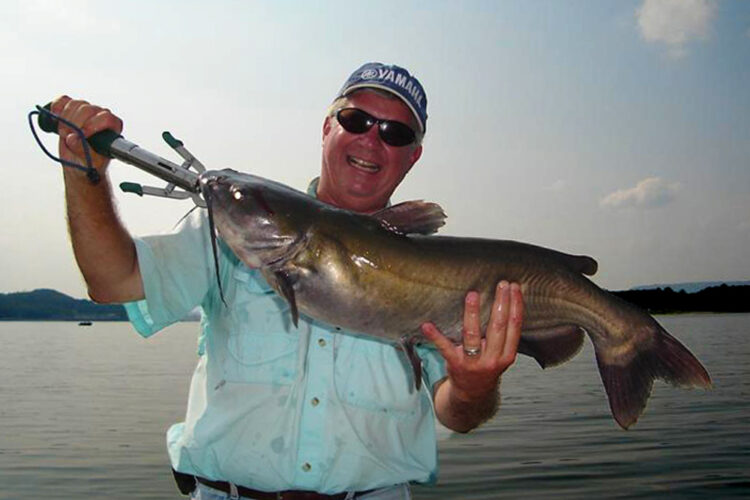 Captain Richard Simms has found that the quality of channel catfish in tailwater areas on the Tennessee River tends to be better during spring and fall than during the rest of the year. (Richard Simms Photo)

It’s unsurprising that Tennessee River channel catfish don’t get much hype. This mighty river and the nine impoundments that cover the bulk of its 652 miles produce incredible numbers of much-larger blue cats, including some genuine giants, plus good numbers of heavyweight flatheads.

That said, channel catfish make up an important part of the catfish fishery on the Tennessee River and provide very dependable opportunities for fast fishing action for catfishermen who focus on the right types of areas. Captain Richard Simms, who operates Scenic City Fishing Charters in the Chattanooga area, said that on average, channel catfish make up about 25 percent of his catfish catch. Roughly 70 percent of the catfish he catches are blue catfish, with the final 5 percent being flatheads. The daily breakdown varies dramatically, based primarily on areas fished.

Simms admits he usually doesn’t target channel catfish. In fact, most of the year, he’s more apt to “run from them,” so to speak, if they get too pesky. When he gets into thick groups of 1- or 2-pound channel cats, which tug on lines constantly, tear up bait and sometimes get hooked, he’ll move to an area where he expects a higher percentage of blues.

That said, exceptions are more common during autumn, because the channel catfish that congregate in the tailwaters of Watts Bar and Chickamauga dams tend to be larger on average than at other times. When channel cats in the 5- to 8-pound range make up a significant part of the catch, fishing areas where those fish abound can equate to seriously fun fishing because channels typically fight notably harder than blues of the same size.

“I often think, based upon the fight, a client might have a 15 or 20-pound blue catfish on the line when a 5-pound channel catfish appears,” Simms said.

Because channel catfish are voracious feeders that will feed on baits of many kinds, targeting them provides anglers with outstanding opportunities for fast fishing action.

Location is the primary determining factor for Simms regarding the catfish species that are the most prevalent in catches. His go-to strategy is to drift with cut chicken breast, and that remains the same whether he’s targeting blue catfish or seeking to tap into a good channel catfish bite.

The most dependable channel catfish concentrations come from what Simms dubs turbine drifts – when he is within a few hundred yards or so of a dam.

“If we fish immediately downstream of the dam, channel catfish are there year ‘round,” he said, noting that channel cat size tends to be better during spring and fall. “At times, there are also really good numbers of blues, but the channel cats are always there.”

Outside of the tailwaters, Simms normally finds channel cats concentrated in areas that have a relatively clean, even bottom of sand, silt, or gravel. Areas that have more boulders and other cover and sharper depth changes generally hold more blue catfish.

“Sometime when a fish bites, I’ll say, ‘that one will be a channel catfish,’ and it will be. I know by type of area.” Simms said. “Of course, I’m wrong sometimes, but they definitely prefer certain types of areas.

Simms typically uses 3/O Eagle Claw Kahle hooks when he drifts for catfish, but he noted that’s a little big for channel cats. If he’s specifically targeting channel catfish, he might downsize to 1/0 because channel catfish have smaller mouths than blue cats, and the smaller hook will result in a higher hook-up percentage.

Simms noted that while he uses the same technique for most of the catfishing – drifting with chicken breast – and that it works well for channel cats, he doesn’t believe someone needs to fish with chicken breast to enjoy good success with Tennessee River channel cats. Anglers regularly do well catching channel catfish with many types of bait, including night crawlers, shrimp, dip bait, and chicken livers. More critical, from his standpoint, is fishing in the right types of areas.

The Tennessee River officially forms at the confluence of the Holston and French Broad Rivers just east of Knoxville and is impounded from the onset by Fort Loudoun Dam. It flows west and south and west again through Watts Bar, Chickamauga, and Nickajack reservoirs in Tennessee.

From there it slices across North Alabama and goes through Guntersville, Wheeler, Wilson, and Pickwick, with the lower end of Pickwick coursing the northeastern corner of Mississippi and then re-entering Tennessee.

Downstream of Pickwick, the river runs north for the remainder of its path, hitting a long riverine section before backing into massive Kentucky Lake, crossing into Kentucky, pausing one more time at Kentucky Dam, and finally feeding the Ohio River, just east of where the Ohio merges with the Mighty Mississippi.

The Tennessee River is large at its formation and gets bigger and bigger through its course as various tributaries add volume. It’s a fairly fertile river that provides outstanding catfish habitat, with endless bends, complex structure, plentiful wood, and rock cover and rich forage that includes shad, herring, crawfish, mussels, and much more.

The tailwater sections are all similar in character, except that those farther down in the system are much larger. All have strong current and plentiful current breaks, are loaded with forage, and offer bountiful rocky cover.

Simms does all his Tennessee River fishing in one area roughly centered in Chattanooga. However, he has no reason to believe things would be different anywhere else on the river, in terms of tailwaters holding excellent channel catfish populations or in terms of other areas that support the highest number of channel catfish.

One thing is certain: Channel catfish provide overlooked fishing throughout the extensive run of the Tennessee River and outstanding opportunities for many anglers.