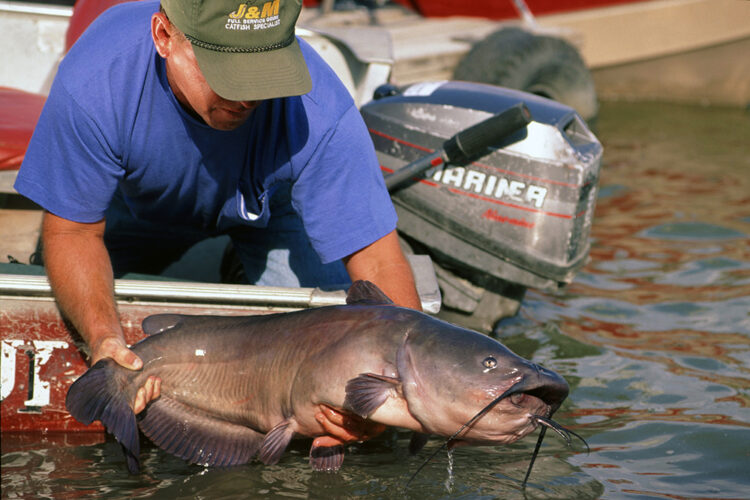 Trophy channel cats like this 30-pound-plus hawg from the Red River near Selkirk, Manitoba can be caught in prime waters from coast to coast in North America. (Keith Sutton Photo)

Waters where channel cats exceed 20 pounds are few and far between, but these rivers and lakes regularly produce whiskerfish that size.

In North America, the muscular, hard-hitting channel catfish sits at the top of the heap when it comes to whiskerfish popularity polls. Flatheads and blue catfish grow to much larger sizes, an attraction for trophy hunters hoping to hook a heavyweight. But because channel cats are much more widespread and abundant, and because they’re unbeatable on the dinner table, the smallest of the Big Three is the catfish most often targeted by American anglers.

No fish is more popular in Iowa, Kansas and Nebraska, not even the largemouth bass, and channel cats are the second most popular fish in Arkansas and Mississippi. They rank third most popular in 10 states: Alabama, Arizona, Colorado, Illinois, Kentucky, Missouri, Nevada, Ohio, Oklahoma and Texas. Everywhere they swim, these speckle-sided eating machines are sought by a dedicated group of anglers who like nothing better than catching these whiskered wonders.

Where can you catch channel cats? Well, almost everywhere. They live in lakes, ponds, rivers and streams in every state except Alaska and are considered important sportfish in at least 32 states. Some fishing holes are better than others, however, including, from the West Coast to the East Coast, these blue-ribbon waters for trophy-sized fish.

This 750-acre mountain lake in southern California’s Orange County has produced channel cats up to 50 pounds, one of the few waters in the country to do so. Much smaller fish are the norm, but 10- to 20-pounders are common, 30s and 40s always are possible, and many believe a channel cat larger than the 58-pound world record could someday be caught in Irvine Lake.

Located 7 miles east of Orange, California, Irvine is a privately owned reservoir with variable hours of operation. No fishing license is required, but a fee is charged for entry. Information: Orange County Parks.

You won’t find a better trophy channel-cat hotspot than the Red River of the North. Whoppers abound in the stretch from Fargo, North Dakota to Lake Winnipeg in Manitoba. And these aren’t just your run-of-the-mill channel cats. For example, Brad Durick, who guides in Grand Forks, North Dakota, East Grand Forks, Minnesota, Olso, Minnesota and Drayton, North Dakota, regularly puts his clients on huge channel cats, including some between 20 and 30 pounds.

Farther north (downstream), below Lockport Dam in Selkirk, Manitoba, fisheries folks say the average channel catfish weighs more than 19 pounds, and 92 percent are more than 30 inches long. Hookups with 17- to 25-pounders are common; fish under 10 pounds are rare. Fishing doesn’t end until the bait runs out or anglers have a case of terminal tendonitis.

Several factors account for the Red’s astounding catfishing. In the northern reach, channel cats from huge Lake Winnipeg make a prespawn migration to Lockport Dam. The population dwindles through summer, but fishing remains excellent compared to similar waters. The dam at Drayton, North Dakota, about 100 miles south (upstream), functions similarly, but channel cats are less abundant and smaller on average. June and early July are prime times for numbers of fish at Selkirk or the dams near Drayton and Grand Forks, North Dakota, but the best fishing for the river’s 30-pound-plus giants tends to be in September.

Information: “Fishing the Red River of the North”

In Nebraska, a state where catfish are the most popular sportfish, there are many blue-ribbon channel cat waters. One of the best is Sherman Reservoir, a 2,878-acre lake in the south-central part of the state, 5 miles northeast of Loup City.

Although catfish lurk around structure and cover throughout the lake, Fisherman’s Bridge is the reservoir’s most popular fishing spot. This area provides bank-fishing access to the canal below the lake’s inlet structure.

Channel cats to 20 pounds are incredibly abundant in this 29,200-acre U.S. Army Corps of Engineers lake near Ashdown on the Arkansas-Louisiana-Texas border. Bigger fish aren’t caught with regularity, but savvy anglers sometimes hook 20- to 25-pounders when fishing along the numerous creek and river channels crisscrossing Millwood’s bottom.

The old lake beds—Horseshoe, Mud, Bee, Yarborough, Clear and Beard’s—inundated when Millwood filled are also topnotch fishing spots for jumbo whiskerfish and plenty of them. With a good bottom contour map and sonar fish-finder, pinpointing these areas is a cinch.

Another first-rate fishing area is the Little River below Millwood Dam. This tailwater produces numerous trophy channel cats each year.

Drop your favorite bait on a bottom rig for pole-bending action any time, day or night, year-round. Live shiners and crayfish are hard to beat for heavyweights, especially during a hot summer night in June, July or August.

Waters in northeastern states usually don’t draw much attention from catfish fans. But Lake Arthur in Pennsylvania is an exception to the rule. Located 30 miles north of Pittsburgh in Moraine State Park, this 3,225-acre reservoir produces tons of trophy channel cats each year, including numerous fish in the 10- to 20-pound range. During one recent year, anglers who fished here entered 59 channel cats exceeding 10 pounds in the state’s Master Angler Program. Fish and Boat Commission surveys show channel cats are the lake’s most abundant species, with most ranging from 18 to 25 inches long.

Hot baits include chicken liver, commercial stinkbaits and night crawlers allowed to sink to the bottom near the lake’s many man-made fish attractors. Anglers in the know can catch cats year-round, but top fishing months are July, August and September.