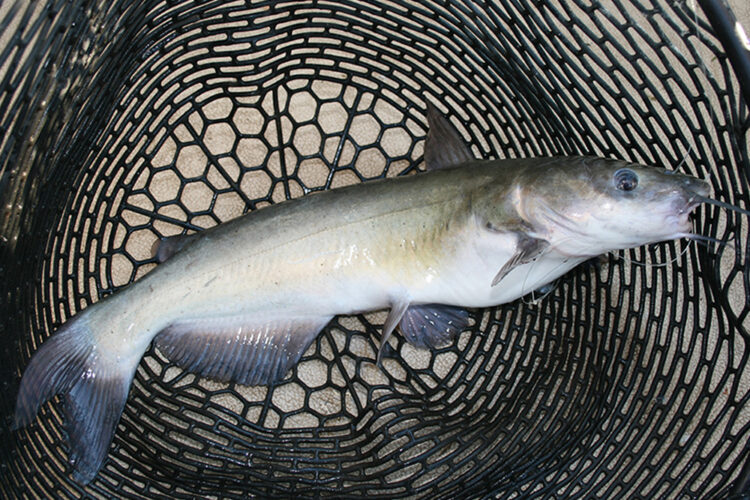 Channel catfish are abundant at Lake Moultrie and according to recent biological data,
this fishery can handle more fishing pressure. (T. Madewell Photo)

The Forgotten Catfish at Lake Moultrie

Lake Moultrie in South Carolina is a world-class fishery for big, blue catfish. The result is a channel catfish resource that has become under-utilized.

One of the most memorable fishing trips I’ve had at Lake Moultrie was with channel catfish back in the early 1980s, when catching channel cats was cool. Four energetic, drag-squealing channel cats were boated one afternoon ranging from 18 to 22 pounds apiece.

Lake Moultrie teemed with big channel catfish long before the blues and flatheads arrived. The fertile waters, and lack of competition, allowed channel catfish to grow to gargantuan sizes. The world record channel catfish of 58 pounds was caught in 1964 and the record still stands.

Ironically, the lake that holds the world record for channel catfish has become a blue catfish factory and the channel catfish are mostly forgotten. The majority of catfish anglers were hooked on the “bigger is better” concept and channel catfish slid into relative obscurity.

Catfish popularity has morphed through the years but time hasn’t erased the phenomenal channel catfishing in Lake Moultrie.

Levi Kaczka, Fisheries Coordinator for the S.C. Department of Natural Resources for Lake Moultrie, said the channel catfish population is thriving and biological data supports it.

“We’ve seen a relatively steady increase in catch rates of channel catfish from our gillnet studies since 2010,” Kaczka said. “The blue catfish population, through competition, seems to be placing a limit on the top-end size of channel catfish.”

He said the channel catfish fishery is excellent with many fish in the 2- to 5-pound class. Netting samples indicate 10- to 12-pound channel catfish are plentiful and 20-pound plus channels are caught.

Channel catfish enthusiasts do utilize this fishery and the late summer and fall produces exceptional action.

Mike Cox, from Bonneau, South Carolina, lives on the shores of Lake Moultrie and while he targets the blues, he’s mastered the art of catching channel catfish.

“Like any catfish, the key is figuring what and where they’re eating,” Cox said. “On Lake Moultrie, I look for flats and ledges adjacent to deeper water and I’ll also fish in the deeper channels.”

“Points are especially good too,” continued Cox. “A textbook channel catfish point on Lake Moultrie is a long point that drops gradually into deep water. If one side of the point also has a steep drop into deep water, that’s even better. It provides the channel catfish quick and easy access from the deep to the shallow water for a longer distance.”

Cox said that when he’s in the right area on Lake Moultrie channel catfish are abundant.

“They’ll cruise the area feeding and I’ll generally fancast multiple rigs in various depths,” he said. “When I find the most productive depth and location, I focus more rigs in that area. The action can be so fast I’ll often have to limit the number of rods fished based on how many people are fishing with me.”

Productive depths vary, but he’ll often find channel cats in shallow water early and late in the day. Cox fishes from an anchored setup and he’ll cast rigs in water depths ranging from 3 feet deep down to 15 to 20 feet deep.

“Channel catfish tend to forage in shallow water during low light times, and cloudy days,” he advised. “But often on bright days, they retreat to nearby deeper water.”

“When prospecting for the right depth I don’t make assumptions of where they may be,” he said. “When I get the pattern, the action is fast. When it slows, I may only have to move 100 yards to get into another group of biting fish.”

Another angler, and frequent fishing partner with Cox, is Bill Geddings, from Lane, SC. The 70-year-old Geddings was targeting channel catfish long before the blues and flatheads were introduced.

“I love to catch big catfish,” Geddings said. “But the channel catfishing provides exceptional action. I’ve found the key to consistent success is a combination of the right bait and location to fish. We may have to search a little while but when we get on them it’s crazy-good.”

“Fishing stink bait is a killer technique for hooking lots of channel cats,” he said.

Cox agreed, saying that stink baits are the most productive technique he’s found for fast action at Lake Moultrie and Doc’s Catfish Getter Dip bait is among his favorites.

“Even with three people fishing, eight rigs can be more than we can handle,” added Cox. “It’s not unusual to have multiple catfish flopping on the floor when the bite is strong. Managing one rig each is exciting, using two creates chaos.”

Cox found that down-sizing the rig, line, and terminal tackle from what he employs for blues makes the fish-fighting more enjoyable and he literally catches more fish.

His rig consists 12- to 15-pound test line, a 1-ounce sliding sinker above a swivel and an 18-inch leader. The rig is fished on the bottom.

When using stink baits, commercial rigs with hooks are available, or a small piece of sponge, that soaks and holds the goo, is deadly paired with a small treble hook. He recommends 1/0 hooks when fishing other types of bait.

“Channel catfish provide a triple threat on Lake Moultrie in that they’re vigorous fighters, abundant, and are generally prime size for great eating,” concluded Cox. “If fishermen want to enjoy a great-tasting catfish meal the opportunity is enhanced at Lake Moultrie.”