Why We Catfish: A Guest Editorial by Secody Howard 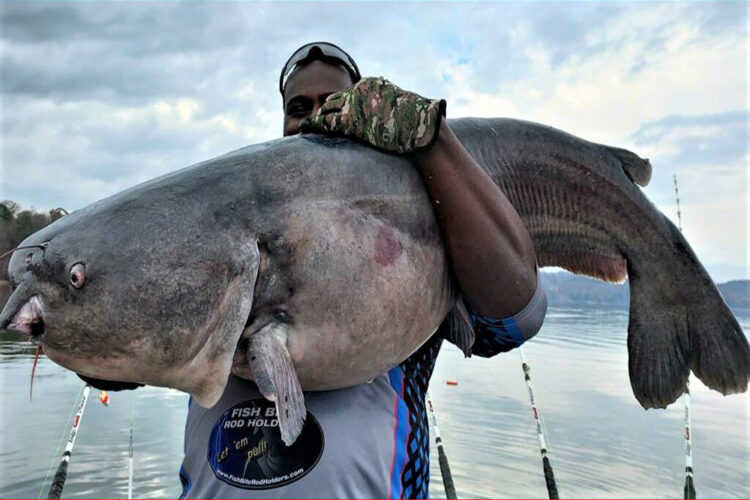 The mystery of not knowing what the next bite might bring motivates me to keep coming back for more.

I migrated north from Texas a few years ago. I am originally from Killeen, Texas but have lived in Huntsville, Alabama for the past 5 of my 30 years. I consider my home fishing waters to be Wheeler Lake.

My grandfather is the person who got me hooked on catfishing and I have loved it ever since! Those memories of fishing with my grandpa are some of the best memories I have.

I remember back when I was just a little kid, my grandpa said, “Cody are you going to be up when I get up to go fishing?” And I would respond by saying, “Grandpa I just won’t sleep tonight—how about that?”

Grandpa liked to get out early. We would leave way before daylight and sit on the river bank for hours on hours. We were usually baited with chicken liver waiting for what I thought was giant fish. The big ones were usually 10-pound channels, but I was happy!

My fishing went from recreational fishing from the bank to competitive fishing in tournaments. I like to tournament fish because I love the competitiveness it offers. It is a challenge because you have to catch fish in a set amount of time. It adds pressure, but that is part of the attraction and I love it.

Just like grandpa, I am a believer in the early bite. We always got out there early for a reason. Now when I fish in tournaments part of my strategy is to catch a limit early and then use the rest of the time to hopefully cull and improve my weight.

Recently I teamed up with my dad, Bill Howard, to fish the North Alabama Catfish Trail. We had a good day weighing 105.43 pounds. Dad was awarded the Top Veteran Award sponsored by Hookers Terminal Tackle. Dad and I are both veterans. That weight was good for second place overall in the tournament, just .05 ounces out of first place. October 15 was also my birthday so it was a special day being there on Wheeler Lake with my dad.

On November 4th and 5th, 2022 I teamed up with Doug McAnally and Matt Russell to fish the Cabela’s King Kat Classic where we won the Big Kat of the tournament award. The big blue weighed 69 pounds. Tournaments are one way I share what I know about catfishing with others.

I try to pass on my fishing knowledge to as many people as I can. The amount of people that I have taken to tournaments that never catfish before is up there. New anglers are inquisitive and I love it when they pick my brain on why we do the things we do when we do them. It is fun to see their eyes light up when they understand why we do certain things.

I am a big believer in catfish conservation. It is a good thing for tournament anglers and recreational anglers alike. It is especially important for us tournament anglers to support and promote good fish care if we want to grow the sport and have a future in it.

As far as fish care is concerned, I don’t use oxygen in cooler times of the year. What I do is run fresh water in the livewell every five minutes or so. Keeping the water fresh is key for the fish to do well. I don’t weigh fish until I have to cull them. That cuts down on the time that the fish are being out of the water. When the water temperatures are higher I do run oxygen.

I like to catfish because of the mystery of not knowing how big the next bite is going to be. I am addicted to that element of surprise of not knowing if that next fish is 5 pounds or 80 pounds. And then there is the sheer power of fighting the trophy catfish. You just don’t know what’s coming next and how you will handle it!

In the end, when it comes to catfishing competitively or just putting food on the table for your family, the most important thing is to just have fun and laugh a little bit!

Editor’s Note: After submitting this story, Secody Howard and his fishing partner Adam Michael Wright were involved in a boating accident during the early hours of a Heart of Dixie Catfish Trail tournament. Secody was able to get Adam from the water and he was transported to the hospital in Huntsville. Secody suffered lesser injuries and was released from the hospital while Adam suffered a broken pelvis and will be hospitalized for a while. CatfishNOW joins the catfish community in offering prayers for a speedy recovery for both.