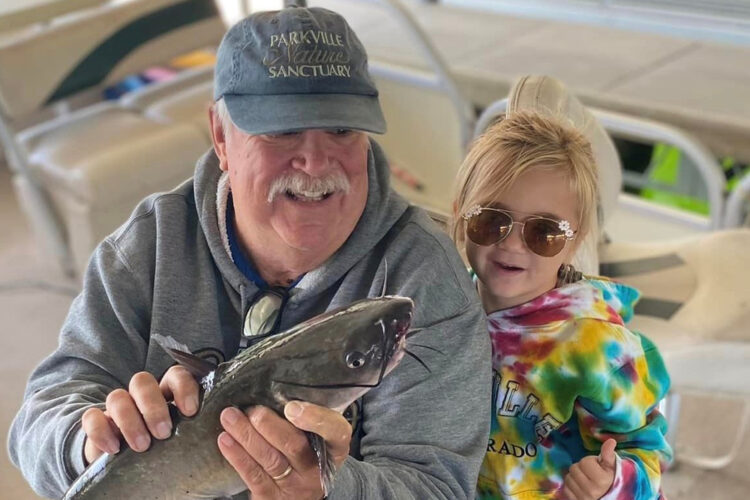 Little Avery didn’t want to hold the channel catfish she caught, but she wanted to be in the picture with grandpa. (Jenny Schiltz Photo)

The Day My Little Granddaughter Became a Cat Angler

Big is in the eyes of the beholder. And this one was big, my granddaughter said.

Never underestimate the magic of a Frozen-theme kids fishing pole.

My 5-year-old granddaughter Avery doesn’t. That’s her lucky fishing rod –all 2 feet, 6 inches of it–and she stubbornly rejects using anything else when she goes out with me.

Consider a fall dock-fishing trip we took on the private lake near Kansas City where I live. We were catching crappies in one slip when I suggested going to a bigger pole and a bigger minnow to go after “something big.”

Avery liked the idea of going to larger bait, but she insisted that it had to be on her fishing rod.

As her mom and dad fished in a nearby slip, she dropped her bait to the bottom and immediately announced, “I have something big.”

I assumed she was hung up on the brush we had sunk. But soon the rod began bouncing as she fought her first big fish.

She strained as she cranked, then tired and panicked.

“You reel him in the rest of the way, Papa,” she told me.

I was amazed at how the miniature rod and reel and 4-pound test held up. Soon, the fish popped to the surface and we netted a big channel catfish.

Avery squealed and clapped, and her parents, my daughter Jenny and my son-in-law Dennis, congratulated her.

After the fish was in the net and on the dock, the questions started.

“Why does it have whiskers?”

“Why was he on the bottom?”

I laughed and gave her a short lesson the behavior of channel catfish. Then she asked one final question. “Can I touch his eye?”

“Uh, no, we’re going to let him go and you might hurt his eye if you touch it.”

I braced for a temper tantrum, but Avery accepted my decision.

We posed for a couple photos and I tossed the channel cat back. My daughter had caught one even bigger a few minutes earlier, but Avery’s fish was the catch of the day.

We didn’t have a scale, but the cat probably weighed 4 or 5 pounds. But it looked much bigger to little Avery.

And to make matters better, it was caught on her prized Frozen pole.

Now she’s hooked. She brags about the big fish she caught and frequently asks, “When are we going fishing so I can catch another big catfish?”

It brought back great memories. Years ago, I took Avery’s mom Jenny, my other daughter Becky and my son Scott on a Canadian fishing trip. We started off on the Winnipeg River, and I was hoping our guide would get them into some of the big walleyes, northern pike and smallmouth bass the area is known for.

But the fishing was slower than expected, and the kids got bored.

I had set up a day of of fishing for big channel cats on Manitoba’s famed Red River at the back end of our trip, and the kids grumbled about having to go.

But I explained that I had already set up the guide and we couldn’t back out.

“We don’t want to fish for catfish,” Becky said, perhaps picturing the small fish she was used to catching at my parents’ summer cottage in Wisconsin.

But that changed when we met up with our guide and we started drifting our baits in the current. When one of the rods bent sharply, Becky got the rod out of the holder and held on as a big channel cat ripped out line. She followed the guide’s instructions, and eventually led the trophy fish into the net.

The mood immediately changed. All three of the kids cheered, and they were suddenly excited about catfishing.

When Jenny and Scott took their turns, they too caught big channel cats. The guide measured and weighed the fish and announced that all three would qualify for Manitoba Master Angler awards.

Then it was my turn. When the rod bowed sharply, I had hopes of adding a fourth big fish to our catch. But my cat was the shrimp of the group, weighing only 3 pounds.

The kids howled in laughter, and I took my medicine. It was great seeing them have so much fun catching a species that is often-maligned by walleye and bass fishermen.

All three of my kids are grown now, but they still talk about that day. We still fish together, though it’s hard for them to get away because of their busy schedules.

Now, I also fish with my four grandkids, all the way from my oldest, Caty, who is a freshman in college, to my youngest, 2-year-old Jack.

We talk about getting everyone together for a Canadian fishing trip and perhaps returning to the Red River for some trophy fishing, but I don’t know if we will ever make it happen.

If we do, I’ll have to convince Avery to leave her lucky fishing pole at home and use something bigger.