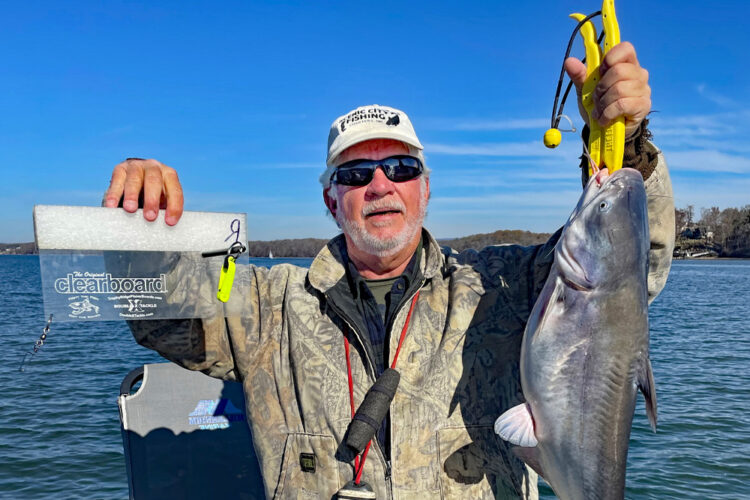 The Nuts & Bolts of Planer-Board Fishing

It was the day before Thanksgiving 2022 and I was on an exploratory mission designed primarily for me to refresh my memory about using planer boards for catfish. It had been a while since I had pulled boards, and I was trolling over virgin water, chosen because the depthfinder showed me a tabletop smooth bottom. I decided fishing there I would be unlikely to snag while I was climbing the learning curve.

Therefore, I was totally shocked when suddenly the distant starboard planer board got crushed, flying backwards as if possessed by demons. The demon, however, was a healthy blue cat. My son-in-law, Ross Roberson, and I were “on the board” with the first catfish of the day.

The water temperature was 53 degrees. My Humminbird displayed virtually no tell-tale arches indicating catfish in the area. In about 30 feet of water on the main channel of the Tennessee River in Chickamauga Lake, I was totally unsure of exactly how fast I should troll, how much weight to use or how far I should allow lines to trail behind my Clearboard planer boards. Again, this trip was primarily to try and figure all that stuff out. The one thing I’ve learned in decades of catfishing is that experience is the best teacher.

I was shocked again when 30 minutes later another planer board went flying, this time carried by a healthy 18-pound blue. I decided regardless of what the bottom looked like or what the Humminbird displayed, Ross and I should continue on. In time, we were rewarded by a third flying planer board.

I prefer relatively light tackle. I think you get more bites and definitely get more fight. Fishing B’n’M catfish spinning rods, Ross was feeling every ounce of energy from this fish.

I knew it was a good fish but told Ross, “On this gear, at first it’s really hard to tell if you’re fighting a 20-pound fish or 50-pound fish.”

Ten minutes later, when Ross got the fish near the boat the first time, we were both in awe at its size!

Then the beast screamed back for the bottom, peeling the 50-pound-test Power Pro braided line off the Okuma Avenger reel. The back-and-forth battle went on for another 10 minutes at least until we finally dropped Ross’s personal best catfish on the deck.

Ross looked at me and, slightly out of breath, said, “Yeah, this planer board thing works.”

In this case, the credit for the exploratory planer board voyage went to my guide partner, Capt. Aaron Massey. Throughout November, Capt. Massey had been putting clients on one trophy catfish after another. One day his clients reeled in five blues weighing 50 pounds or more.

Capt. Massey spends most of his catfishing time on the Tennessee River. Depending upon which section of river he is fishing, he can depend upon having some current flow. But sometimes rainfall, water releases through TVA dams or his location—such as the large reservoir areas—bring about a lack of current. He says that is when he pulls out the boards.

“Yeah, I usually base the boards on the current or the lack of current,” said Massey. “With good current I typically anchor or vertical drift. But if there is not enough current to anchor or drift effectively, the next thing I’ll go to is pulling boards. It simply allows me to cover much more water and put the bait in front of more fish.”

Stealing a page from his playbook, I dug out the four planer boards I had purchased years before but had only used on rare occasions.

Like most forms of fishing, every angler usually figures out their own system. Rarely is there a one-size-fits-all scenario. Mine differed somewhat, but here is Capt. Massey’s system.

He rigs a three-way rig with a sinker leader 3 to 4 feet long. He prefers to use a 4-ounce, tube-style, snagless sinker.

“I bait up and cast it behind the boat as far as I can throw it,” he said. “I’ll release line, making sure it is dragging or bumping bottom based on the depth and my trolling speed. Then I’ll just hook my board to the line and let them start spreading out. I’ll usually have about three times the water depth of line behind my boards.”

“I’ve used some other boards, but the Spread ‘Em boards seem to spread out the best for me,” he said. “They’re made specifically for catfishing.”

Spread ‘Em offers two styles of line clips: the ones called “Grip Clips” release the line when a fish hits so the angler has a direct line to the fish immediately, without the full drag of the planer board.

However, Spread ‘Em also offers what they call a “Twistlock Clip,” which locks the line tight and can only be released when the angler reels the board up to the boat where your partner can remove the board entirely.

“If you have a bait snag on the bottom, you can either pull it free or break it off, and the board stays attached to your line,” he said. “With the Grip style, the line comes unclipped, and the board will slide off your line if it breaks. Then you have to pull all your lines in and turn around to go back and retrieve it.”

Capt. Massey always trolls upstream against the current and says he can typically fish boards if the current is less than 1 mph. Any faster and he says fishing the boards just aren’t really effective.

I set my lines somewhat differently. I ran line through the free swivel of my Clearboards and dropped my three-way rigs straight down on 50-pound test braided line. Once my 3-ounce standard sinkers hit bottom, I release about 20 feet of additional line and then clipped the board. Then I adjusted my trolling speed to keep sinkers/baits bumping bottom in 30 feet of water. In very light current (maybe 0.2 mph), an upstream trolling speed of about 0.5 or 0.6 mph kept my baits on the bottom or in the strike zone.

“Pulling boards is not a great thing to do over a rocky, snaggy bottom,” said Capt. Massey. “You just get hung up too much. But the best thing about it, you often get some really aggressive strikes. Pulling bait under the boards just seems to initiate great reaction strikes. It’s a blast when you see one of the boards just take off.”

Again, your tackle, water depth, flow conditions and other variables will often dictate what works best for you. The most important thing is just do it. If you’ve never used the technique before, it is one more excellent weapon everyone should add to their catfishing arsenal.

(From Chattanooga, Tenn., Capt. Richard Simms is owner of Scenic City Fishing Charters, Inc. He is also the Editor of our sister magazine, CrappieNOW.com and serves on the Board of the Southeastern Outdoor Press Association. He began his outdoor career as a Tennessee game warden later choosing journalism (and guiding) as his chosen profession. Check out his book, “An Outdoor State of Mind.” You can contact him at Richard@ScenicCityFishing.com.)