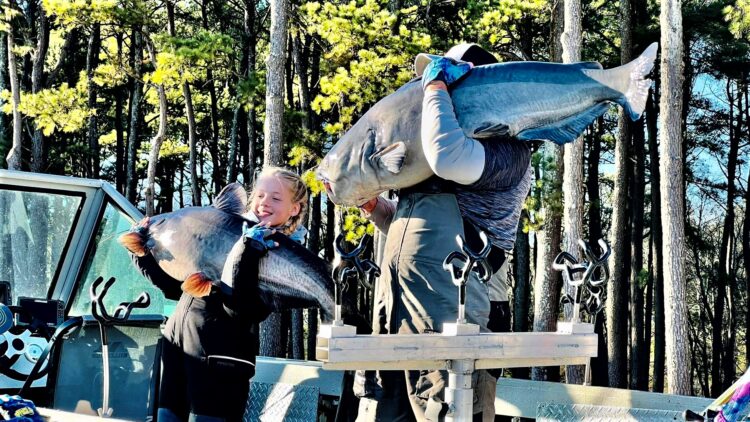 Making Memories on the Trail

Kevin Childress and his daughter Peyton Childress claim the win at the North Alabama Catfish Trail event on Pickwick Lake. 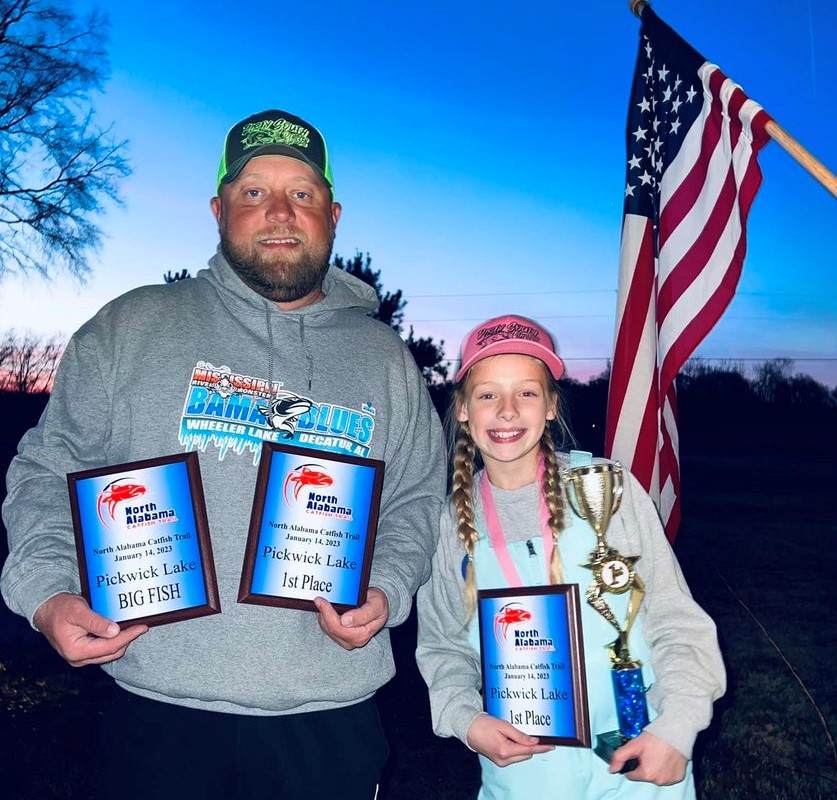 The North Alabama Catfish Trail, (NACT)kicked off the 2023 tournament season with an event on Pickwick Lake. The January 14th tournament attracted 21 boats to the Florence, AL area.

Kevin and Peyton Childress were one of the 21 teams that traveled to the Florence Harbor Boat Ramp located at McFarland Park in Florence, AL. The ramp gives anglers access to Pickwick Lake on the Tennessee River, a big catfish destination.

Kevin and his family moved to Alabama recently and part of the reason for moving was his love of catfishing.

In his own words, “We moved down here at the beginning of June. Yes sir, the catfishing capital of the world.”

His excitement for his new state and new catfishing opportunities grew quickly and exponentially. He was catching trophy cats on a regular basis and Peyton was doing her part. She picked up a couple of youth angler awards as the fun continued for the father/daughter duo.

Just a week before the Pickwick event Team Childress included Justin Arthur along with Kevin and Peyton. They fished the MRM Bama Blues event out of Decatur, AL where they weighed 100.7 pounds and finished a respectable 12th place out of 108 boats. That placement gave eleven-year-old Peyton the 2023 Top Youth award.

Next, Kevin displayed his catfishing skills while prefishing for the NACT. It was his first time fishing the popular Pickwick Lake. 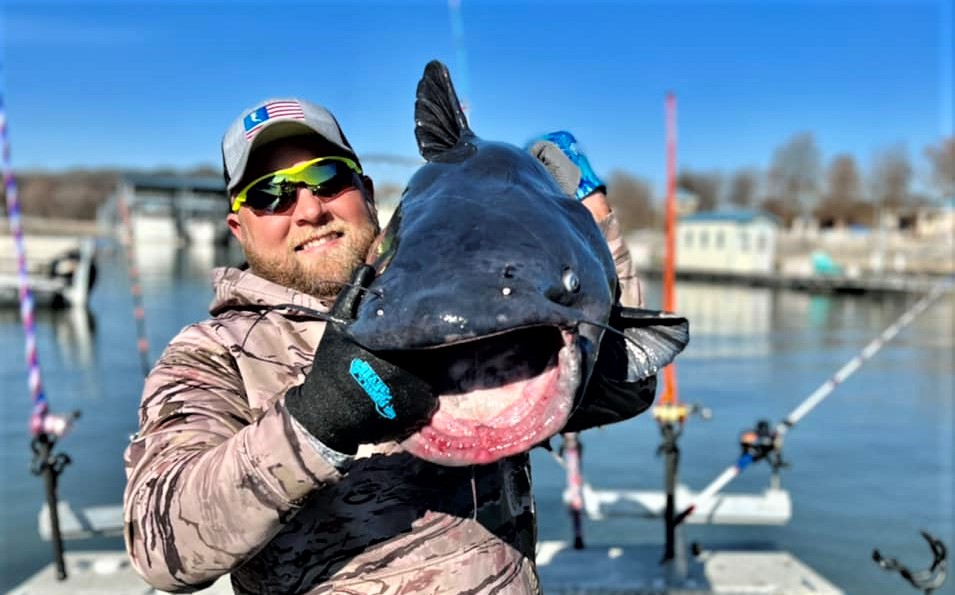 “Well to be honest I haven’t fished Pickwick one time since we moved down here last summer” revealed Kevin. “So when I went out on Monday to do a little prefishing I was pleasantly surprised when I anchored up in the first spot and the first fish was my new personal best (PB)— a 93-pound blue cat.” (See photo above)

Over the next two days of prefishing, he only caught one more fish. It was a 40-pound blue cat but it did not help raise his expectations for the tournament much. The team carried on and he and Peyton had a strategy to anchor fish on tournament morning at a few spots he picked while prefishing before switching over to bumping.

“We started the morning anchored up,” reported Kevin. “We tried a few different spots for the first three hours and never had a bite. So we decided to go do some bumping.”

It was an unusual hunch to bump water that was as cold as the river was that morning. As a rule of thumb, most anglers don’t like to bump in water that is less than 55 degrees. Going with his gut, Kevin rigged for bumping by tying a three-way swivel to his 80-pound braid mainline. He added a 6-inch length of 30-pound mono to a 3-ounce cannonball sinker and finished it off with 36 inches of 100-pound mono leader and an 8/0 circle hook.

“I was getting a little bit desperate,” explained Kevin “The water temperature was a little colder than we’d prefer at 51 degrees, but the 40-pound blue I caught on Wednesday came while I was bumping so I figured it would work. On our first pass bumping we got a 49-pound blue.”

That nice blue raised their confidence and they decide that they would spend the rest of the day bumping. They were grinding it out with their chosen strategy and caught one small fish of about 8 pounds,

“With 45 minutes left to fish we decided to run up and bump some shallow water,” recalled Kevin. “It was only about 7 feet deep. We caught another fish that weighed about 20 pounds but we knew it wouldn’t be enough so we just kept bumping.”

They were pressured by the thought that they were getting down to the last few minutes of legal fishing. And that’s when it happened.

“I had one of those bites they call a thumb burner,” described Kevin. “That fish grabbed the bait and started ripping drag. I had Pey reel in our two suspended rods and get the net ready.”

When the fish finally surfaced Pey slipped the net under the fish and tried to lift it in the boat. The handle on the net broke and the fish swam out of the net.

“Now we’re trying to net a 60-pound  fish with a broken net in 7 feet of water,” continued Kevin. “It was a stressful and wild situation for a few minutes. When we finally got the fish in the boat we looked at the time and realized we only had 6 minutes left to fish.”

With that little time remaining, they prepared the boat to travel and headed to the boat ramp and weigh-in. Their

last fish of the day weighed 60.7 pounds, raised their total weight to 117 pounds, gave them first place in the tournament, and earned them Big Fish honors! To top it off, the weight was sufficient to earn Peyton the Top Youth Angler award!

“Both Kevin and Peyton are strong, dedicated anglers,” said NACT director, Lisa Gail Haraway. “Both of them love the sport of catfishing and are dedicated to it. What I mean by dedicated is that they both are often out on the water, not just on tournament day. They are out there every chance they get. They are either looking for fish, fishing, or bait fishing. We are very proud to have them as part of our tournament trail.”