The CatMasters at Possum Kingdom 2023 – How They Fished 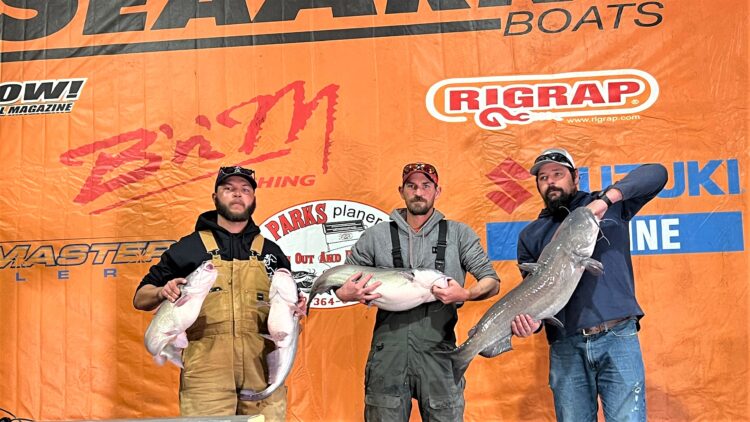 Coming from behind to win was the name of the game at CatMasters Possum Kingdom event.

The CatMasters launched their tournament trail in February of 2017 on Possum Kingdom Lake. It has grown from that popular high payout tournament to one of the most respected trails in the nation. This year marks the trail’s sixth visit to the Texas Lake.

The 2023 CatMasters at Possum Kingdom (PK) attracted 67 teams and 167 anglers to compete for more than $9,000 in cash and prizes. PK is not normally thought of as a big catfish lake and it can be a challenging bite in the winter. Nevertheless, teams from all over the county come to try their luck because of what the CatMasters organization offers.

Stage duties at the January 20-21, 2023 event were performed by James Milton and Ty Lee Nall. Skinny Busby and Bryan St Ama filled other necessary duties while Jesse Swanson produced the live feed. Catfish fans witnessed some very nice weights in the 2-day event. Day-one anglers posted 1,306.47 pounds. At the end of day two, 2,285.47 pounds of catfish had come to the scales.

The tournament is part of the ACA Tournament Alliance so competing ACA members are also competing for thousands of dollars in cash and prizes and a chance to win a SeaArk boat package in an ACA drawing.

BIG FISH for day one was caught by Team Cat Trackers (Brad Halencak, Cody Robbins, and Shalen Robbins with a 28.70-pound PK blue cat. The final day was set up with many teams in position to make a run at the leaders. One team came from 21st place to finish 3rd. 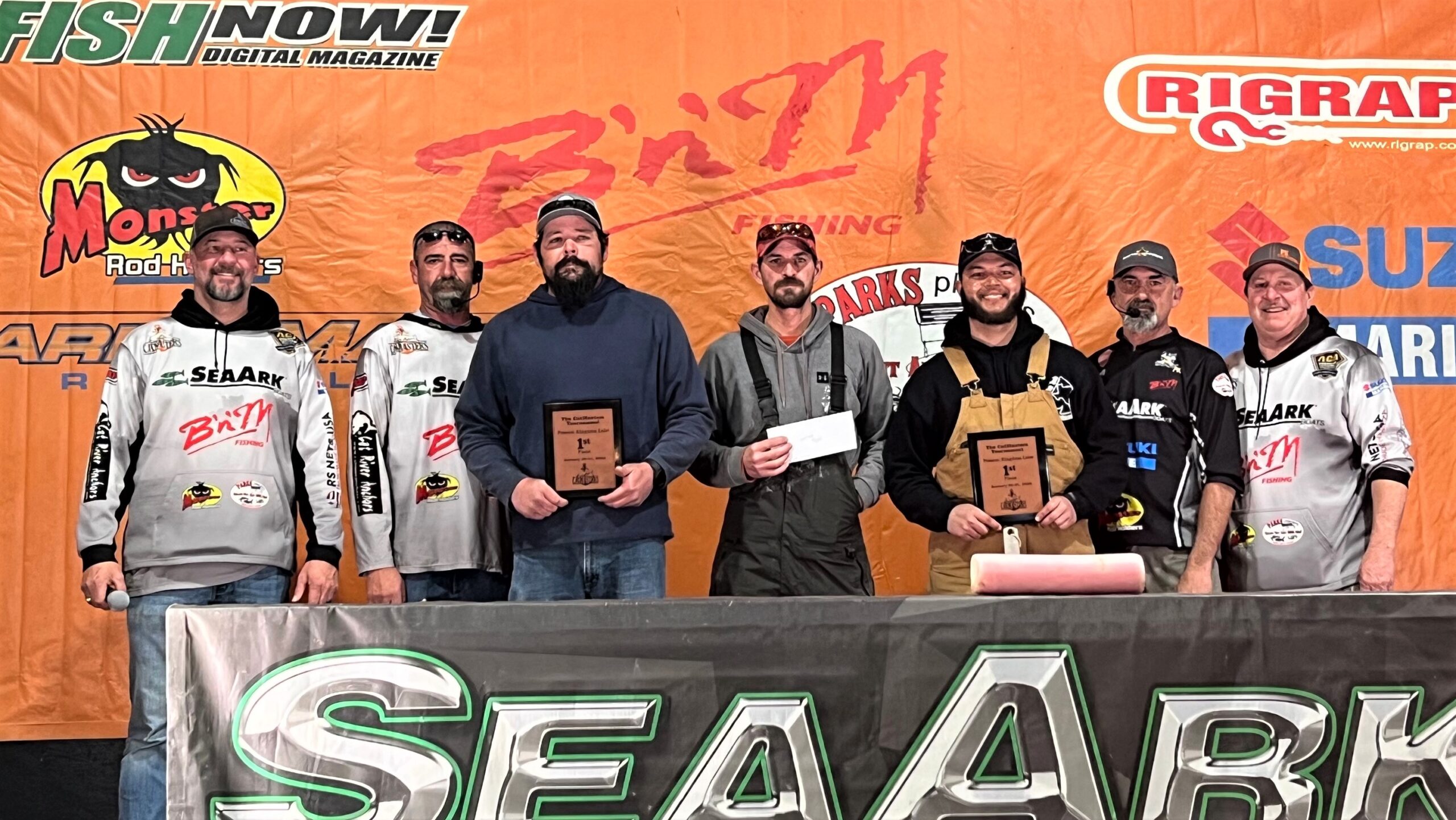 Team Toy Shop (Michael Reed, Aarron Hagen, and Dalton Mitchell) teamed up to take the top spot on Possum Kingdom. They had a day one weight of 57.81 pounds earning them the 5th place spot after day 1. Day two added 71.33 pounds and moved them up to the top spot with a 2-day winning total of 129.14 pounds.

“Day one was a very slow, cold, cloudy morning,” reported Reed. “We started in about 2 feet of water. We fished until about 10 a.m. and didn’t have a single fish in the boat.”

Team Toy Shop decided to move and look for some trees. They downsized bait with the idea of at least getting some channel cats. Twenty minutes into the new spot they slammed a 28-pound blue.

“That gave us some high hopes for the shallow water,” continued Reed. “We decided to stick to the shallows. An hour and a half later, we never got another fish in the boat and changed plans to go out to some deeper water.”

They spent about 30 minutes driving around in trees that were in water around 10 feet deep. They started marking some good fish and decided to pole down there and fish for the rest of the day and ended up in 5th place.

Feeling that they had made a bad decision on day one they decided to return to shallow water for day two. They fished the first spot for about an hour. They caught one channel cat before deciding to go back looking for trees and drops.

“We marked a good stack of fish,” recalled Reed. “We nosed up to a bank where the water was 10 feet behind the boat. I put all big cut shad on all my poles. About 15 minutes later the fight was on. I was hooked up on a 29-pound blue.”

That nice blue was what they needed to stick to finding drops. They continued to find some decent fish. They just continued to cull the smaller fish and it paid off for them. 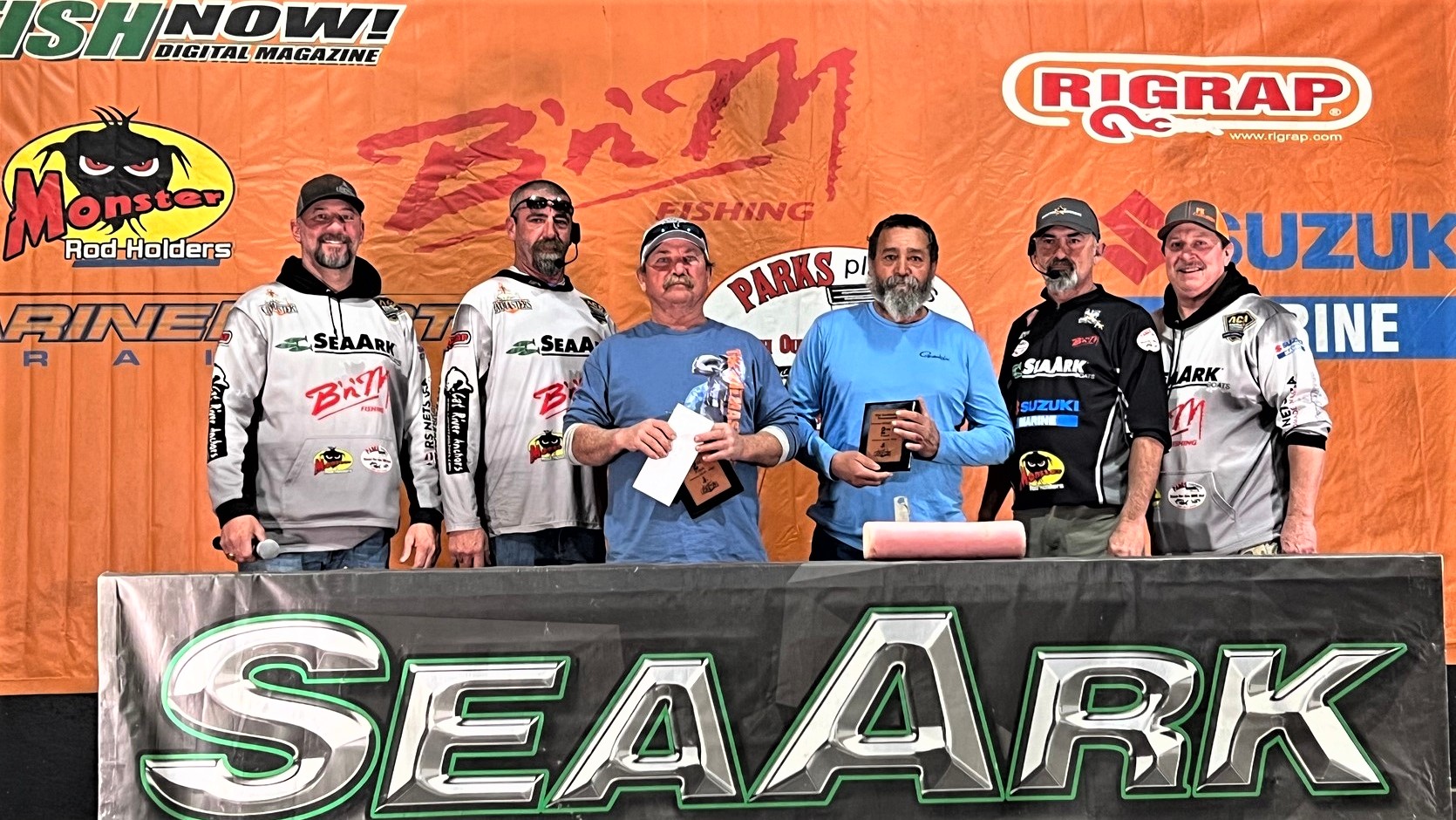 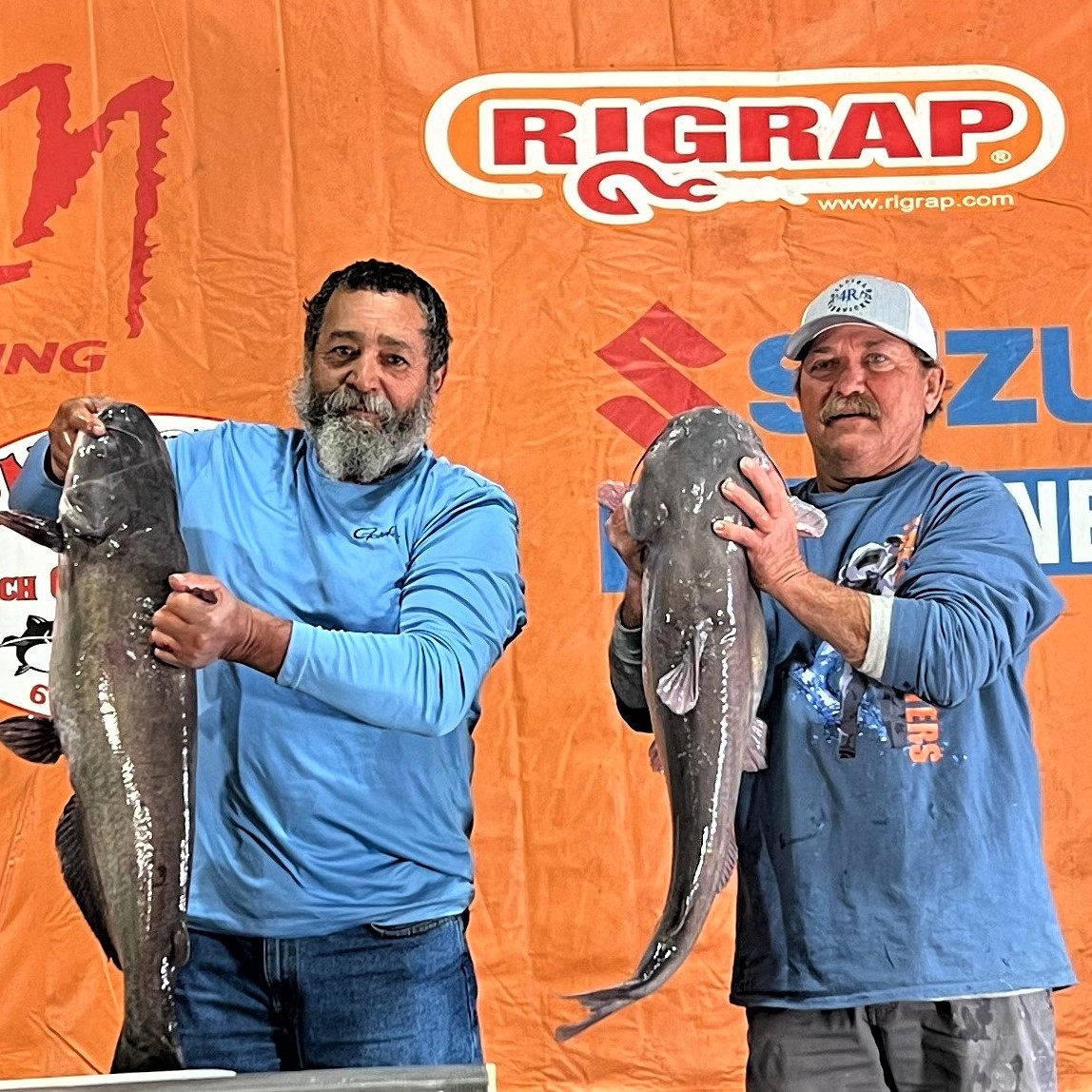 The runner-up spot went to Jerry Larance, Frank Leija, and Andy Salazar. The team brought a day one weight of

The team was the first to weigh on day two because of boat trouble so they lost a little fishing time. They fished the same spot on both days in about 54 feet of water. 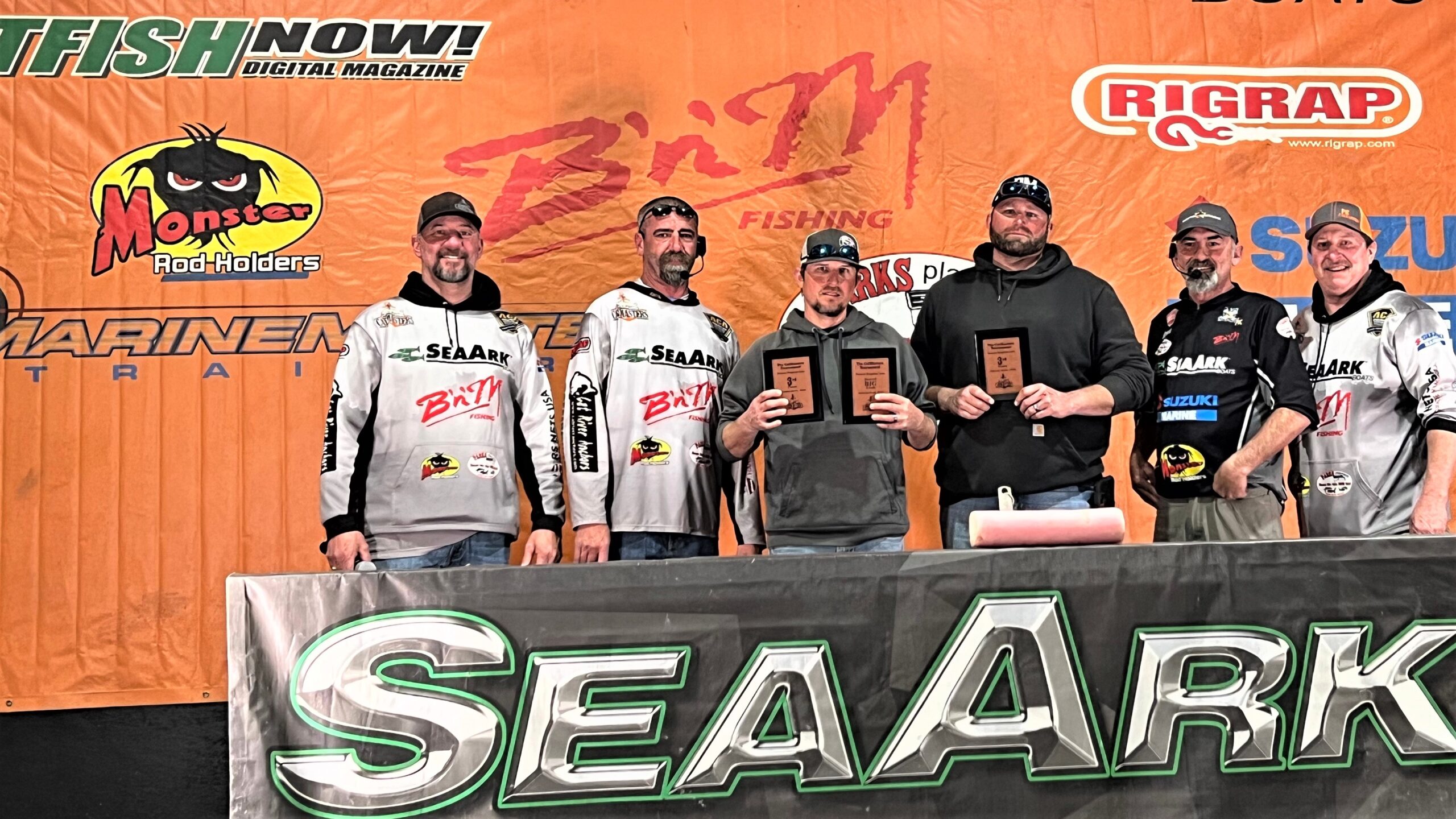 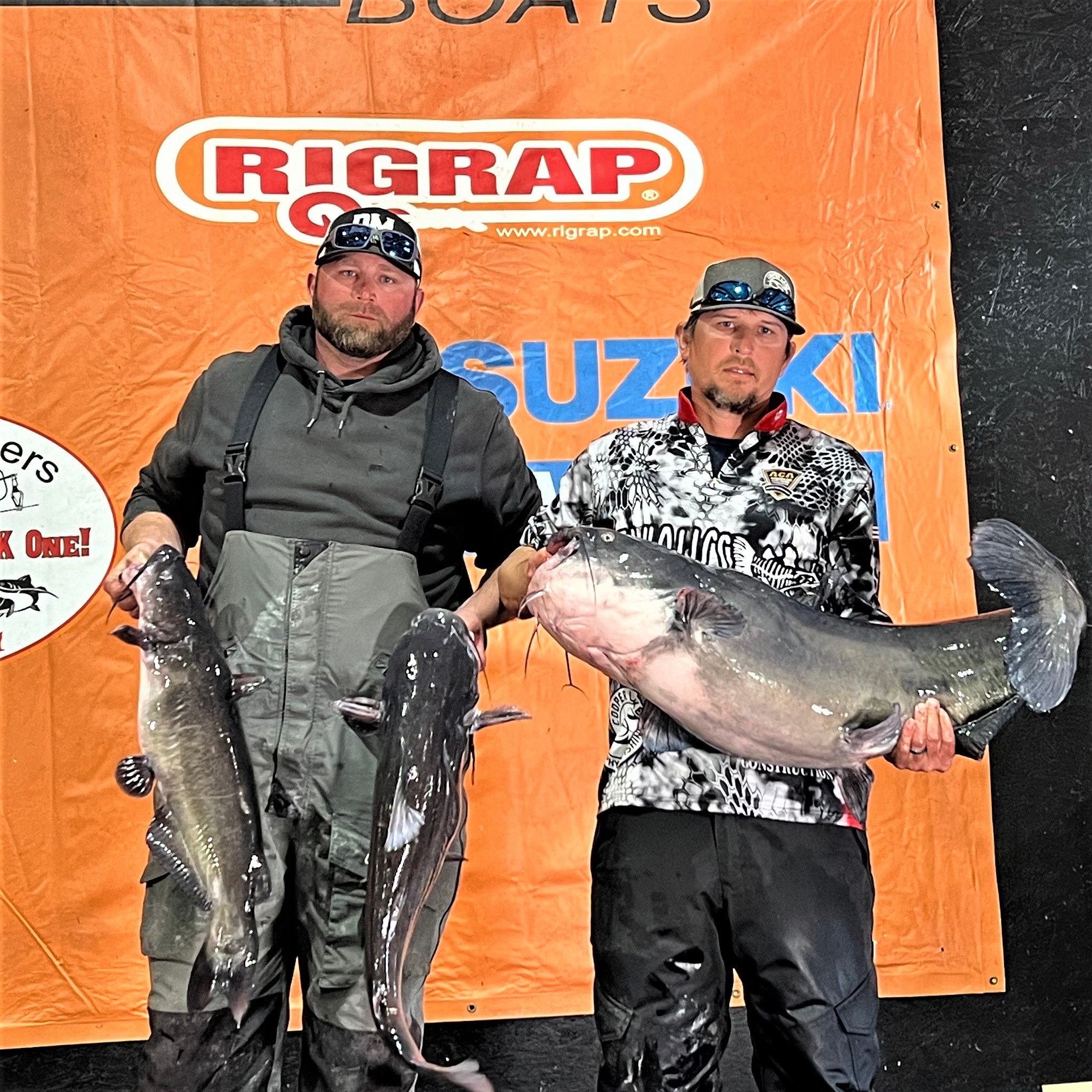 Bringing in the 3rd place bag were Matt Weathers and Chris Kenworthy. They brought 113.42 pounds to the scales to earn third-place honors and a check for $3,000. They also claimed Big Fish day two honors with a 40.74 pounder which was good for Overall Big Fish.

Weathers and Kenworthy won the event last year in 80 feet of water. This year, the team fished deep all day on the first day and did not do as well as they would like. Their day one weight of 28.09 pounds had them in 21st place at the end of the day.

Team Kataholics changed strategy and fished wind-blown points on day two. They caught their fish in water ranging from 7 to 20 feet deep. They added 85.33 pounds on day two and moved all the way up to 3rd place.

They reported that they did not get their first fish until 11:00 am on day one but had all their weigh-in fish by 9:00 am on the final day. 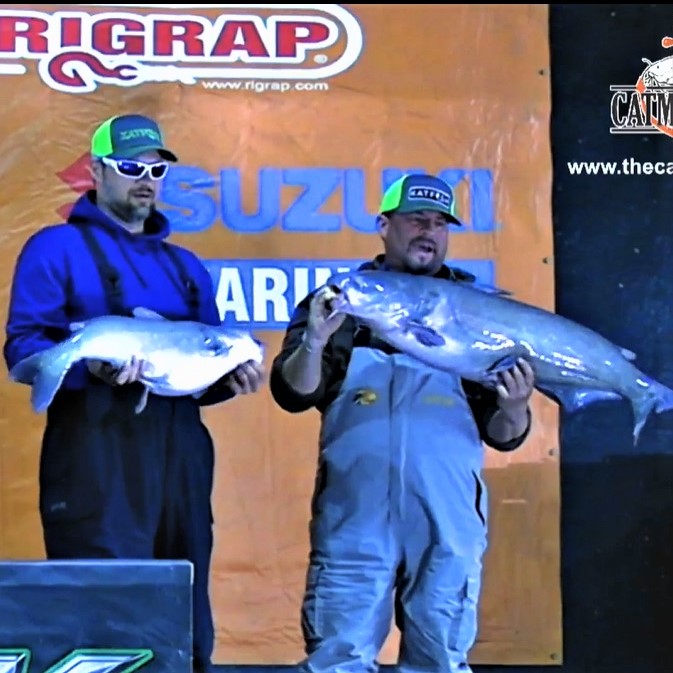 Other Winners
With 67 registered boats the CatMasters at PK paid 8 places. The remaining teams and weights are listed below along with the Youth Angler Award, Top Finishing Female Award, and Veteran Big Fish Award. 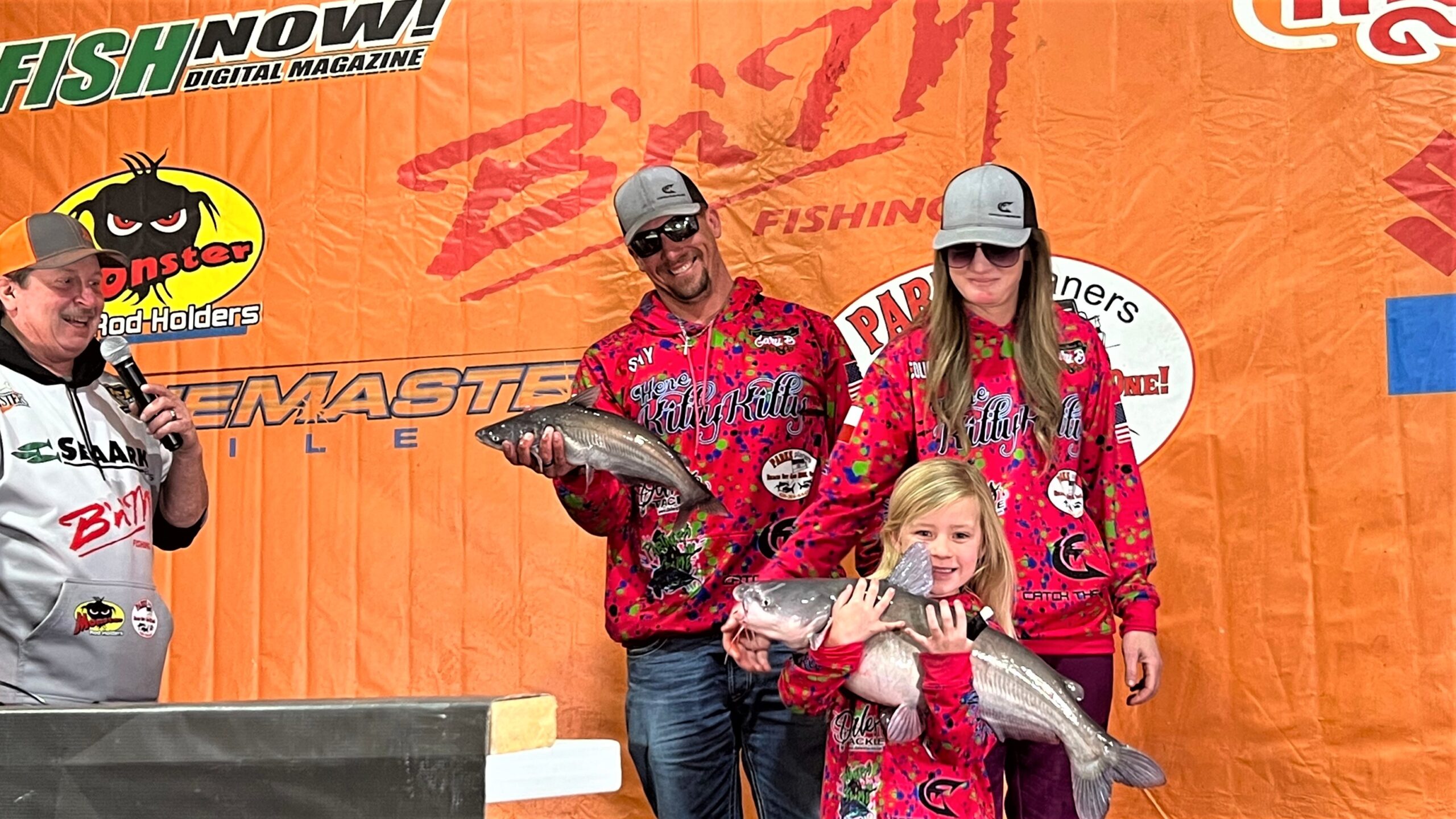 Top Youth angler went to Stevi McDonald fishing with Shay and Courtney McDonald. The team finished 15th in the tournament. 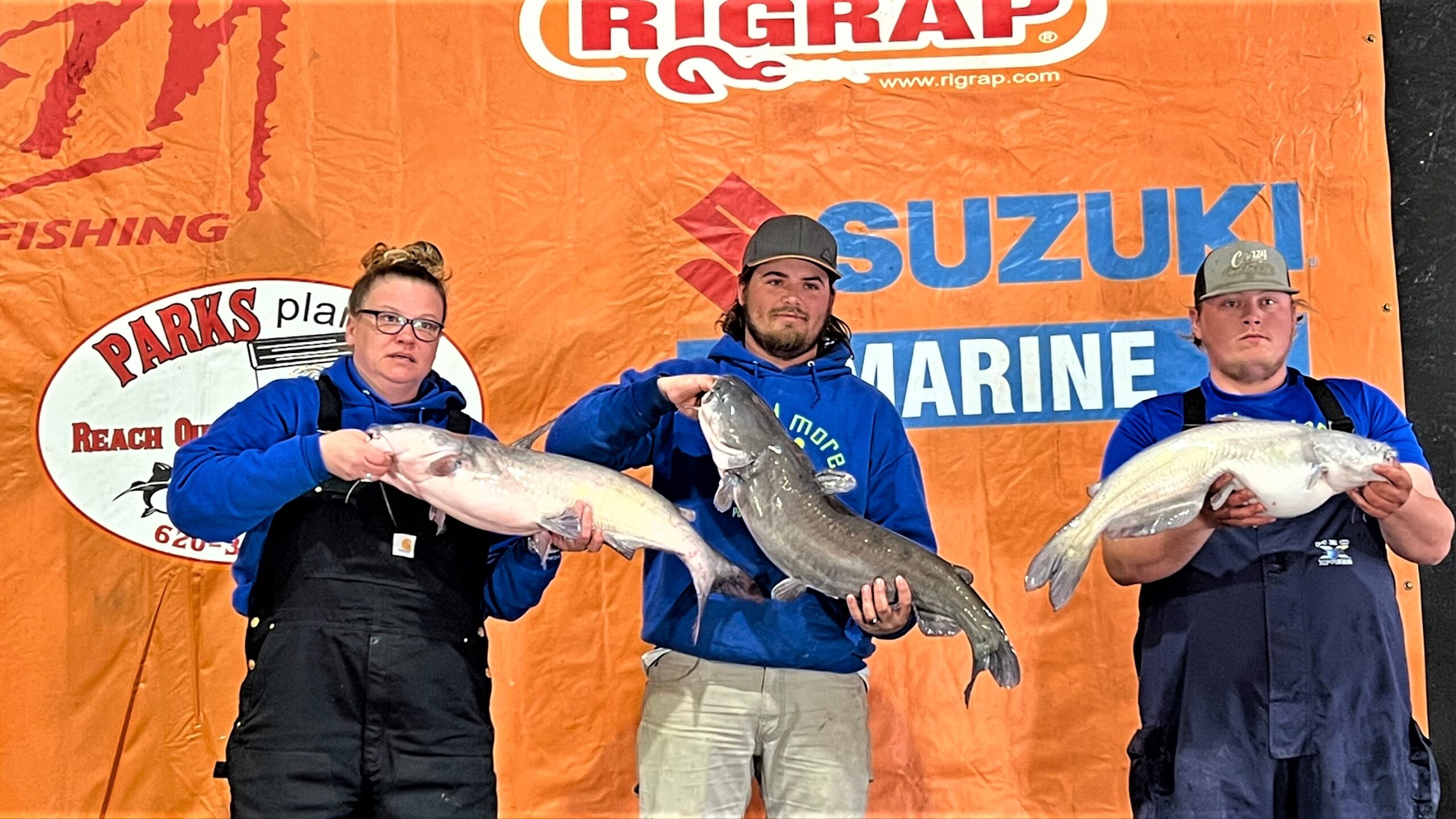 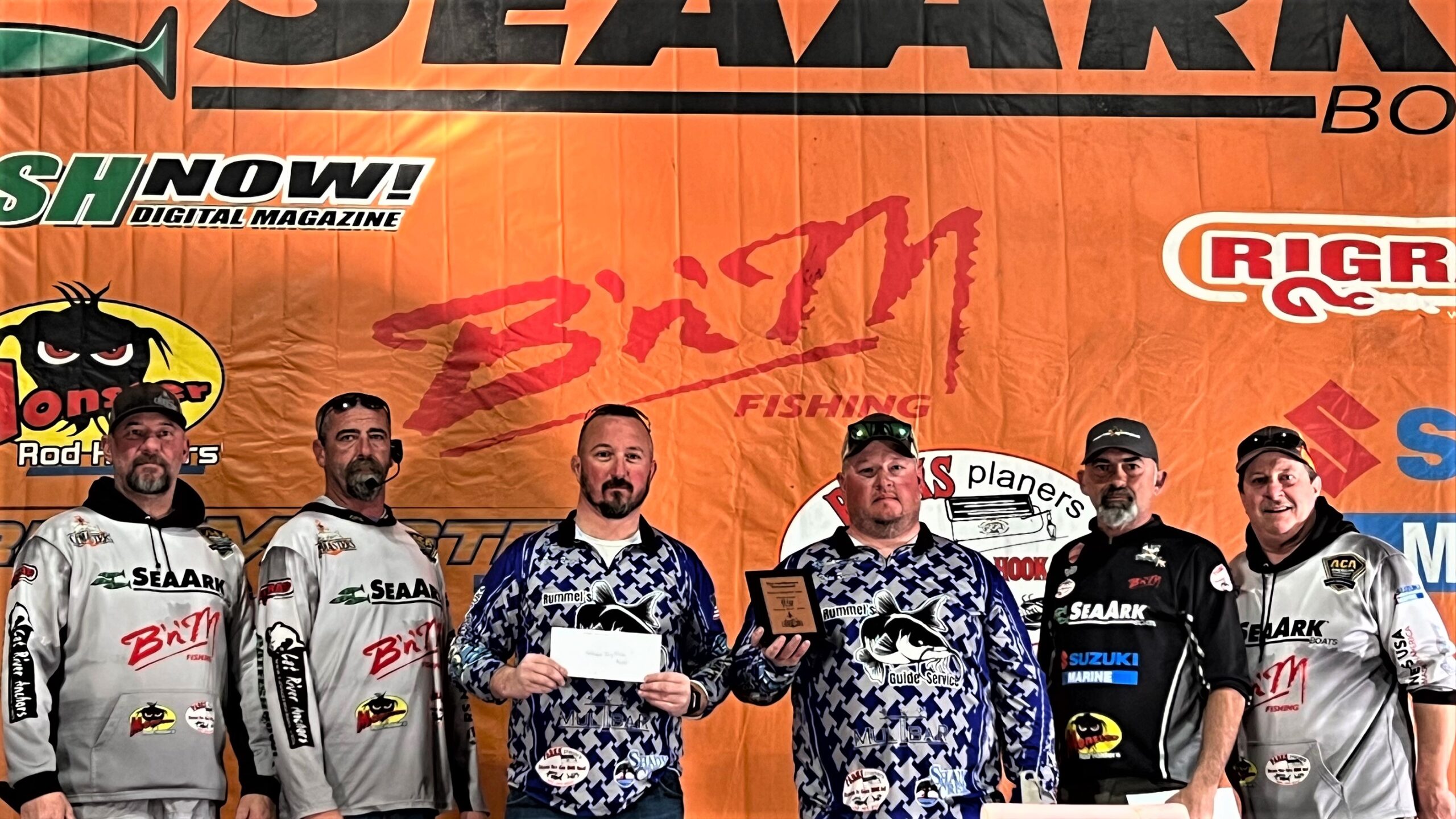 Veteran Big Fish honors went to Nolan Rummel and Travis Rummel with a 25.14-pound blue. The team finished 6th in the tournament.

Final Thoughts
Possum Kingdom Lake produced an exciting tournament for the competitors. As is often the case in 2-day events the winners emerged from lower in the field following day-one’s competition. The CatMaster series of events continue to attract anglers because they are planned with innovation, efficiency, and anglers in mind.

“I would like to thank SeaArk Boats, BnM Poles, Monster Rod Holders, Parks Planers, Suzuki Marine, Marine Master Trailers, Rigrap, and CatfishNow for their continued support,” stated Tournament Director Bryan St Ama. “Also a special thanks to our local sponsors, Toy Shop at PK, Let Us Do It Landscaping, and the PK Chamber of Commerce.”

“I would also like to thank all our volunteers,” concluded St Ama. “They always step in wherever they are needed and make each tournament run smoothly.”