No Result
View All Result
Home Shrinking the Gender Gap 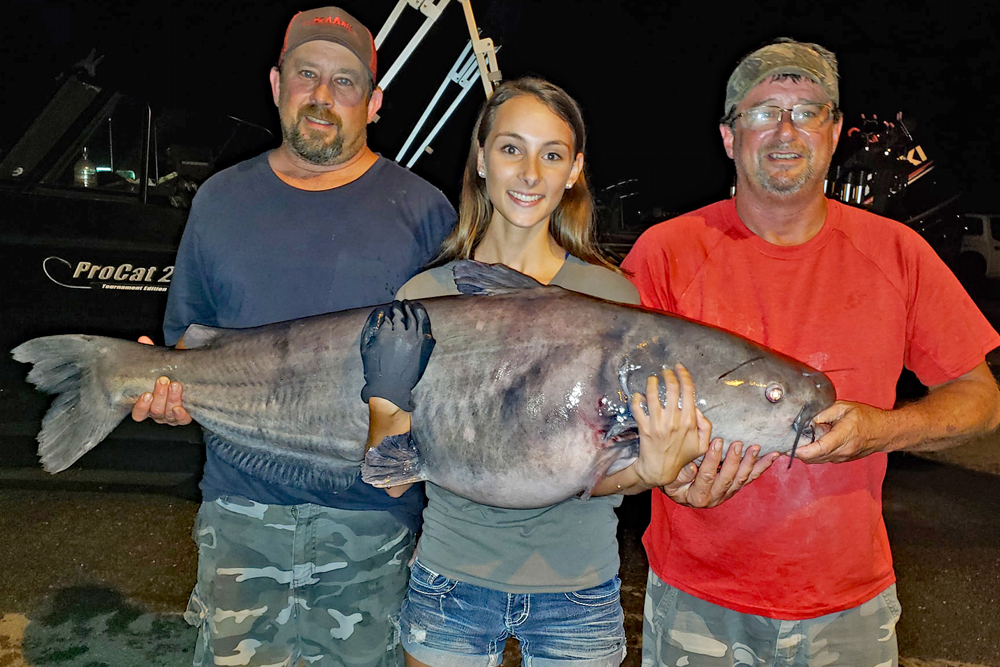 Brooke Mayfield shows off a trophy blue caught fishing one of the many tournaments she fished with her Dad, Chad Mayfield (left), and friend, Jeff Helms (right). (Contributed Photo)

“My Dad always tried to take me fishing but I would never go. I would have nothing to do with it, ever.” ~ Brittany Sapp

“I started hunting when I was nine years old. Then started going to catfish tournaments with Dad. I’m definitely a Daddy’s Girl.” ~ Brooke Mayfield

Brittany Sapp and Brooke Mayfield both love catfishing. However, both were introduced different ways, different times, and approach their catfishing different ways. Both agree, however, that more women need to give it a try.

It was ten years ago when Brittany, then 23 years old, was finally bitten by the fishing bug. Young love is apparently a huge motivator. She wanted to impress, or maybe appease, her then-boyfriend, now-husband, Bryan Sapp, so she went fishing with him.

“He hooked one and handed me the rod. He said, ‘Just try it, just try it,” explained Brittany. “I loved it. Catching any fish is always such a surprise. You don’t know what it’s going to be, what it’s going to look like. It’s like Christmas morning on the end of your line. My Dad says, ‘You would never go fishing with me before.’ Now I’m calling my Dad up to go fishing.”

Twenty-one-year-old Brooke, on the other hand, spent her formative years growing up in a catfish boat with her Dad, surrounded by rods, reels, and smelly cut bait.

“I’ve been driving her to SeaArk catfishing tournaments since she was 12 years old,” said her Dad, Chad Mayfield. “She never complained, she puts her life jacket on and rides the storms out. And she’s caught a lot of nice fish over the years.”

Two years ago, Brooke was featured in a CatfishNOW video, teaching readers how to snell a hook

Still in college, soon to graduate with a degree in Respiratory Therapy, and already working at UAB Hospital in Birmingham, plus working part-time at Bass Pro – Brooke finds fewer catfishing days right now. But she says she will be on the water whenever she can, most likely with her Dad.

“I always want to spend time with Dad. It’s a bonding experience, and I learn something new every time we go out,” she said.

She is also passionate about spreading the message to other women, or men.

“We have to keep the catfishing community alive,” she said. “Everyone should experience it at least once.”

That describes Brittany. Hailing from Smithville, Pennsylvania, she and husband Bryan, fish a lot, year-round, often exploring the winter ice with their kids. Brittany is proud to share that her favorite fish to catch are carp. She has a carp tattoo to prove it.

However, she also has a catfish tattoo she says she got after her very first Tennessee River catfishing excursion.

She and Bryan don’t have many big catfish in their Pennsylvania fishing world. They first came to Chattanooga for a short vacation in 2013. Part of that getaway included a catfishing trip with Scenic City Fishing Charters.

With the exception of last year’s COVID pandemic, they have returned EVERY YEAR.

It is actually surprising to see how much Brittany enjoys fishing. There are few anglers who get more nervous or stressed while fighting a fish.

“I do,” Brittany admitted. “I get really excited. They’re so fun, I don’t know. I get so nervous that I’m going to lose it. The whole time I’m so stressed out. It’s that way with carp fishing too. I’m praying the whole time, ‘Please don’t get off.”

Her excursions on the Tennessee River have yielded plenty of trophy cats, some on video.

They have also yielded some heartache.

In her network, Brittany is disappointed that she doesn’t see more women on the water fishing.

“I don’t know why. They’re just not big into it for some reason,” she said.

In a 2003 very scientific study on “The Influences of Gender on Fishing Participation,” researchers found that young women generally have lower “perceived” abilities and therefore may not be developing an intrinsic value for fishing, contributing to their lower level of participation in adulthood.

The keyword there is “perceived.” In many, or most cases, we can agree that perception is not reality.

The Mayfields said, however, they are seeing more women in the catfishing tournament scene.

“Nowadays you see a lot of guys with their wives fishing the tournaments,” said Chad. “My wife is starting to take an interest in it and I’m going to be taking her more often.”

Brooke adds, “Every tournament I’ve been to with Dad, at least one other woman is fishing.”

There have been a few catfishing tournaments held exclusively for women. COVID interrupted those last year. Brooke is hoping to see more in the future. She adds, however, there is nothing to stop any woman from giving it a try, whether there’s a man to guide them along or not.

“Just do some research about the water you live near,” she said. “Go out and try it. What’s the worst that can happen. Not everybody fishes the same way. Trial-and-error is always the best teacher.”

In a Special Report by the Recreational Boating & Fishing Foundation, female fishing participation lagged behind male participation, however, the gender gap continues to shrink. Since 2017, female participation numbers grew by an annual average of three percent – from 17.1 million people to 17.9 people. The participation rate by women increased from 11 percent to 12 percent.

With enthusiasm, Brittany said, “Just do it, try it. Cause you’ll get hooked for sure… for SURE.”

On Facebook search the hashtag #girlsfishtoo and you’ll find thousands of posts by women willing to “just do it.”

Brittany and Brooke agree, you should too.