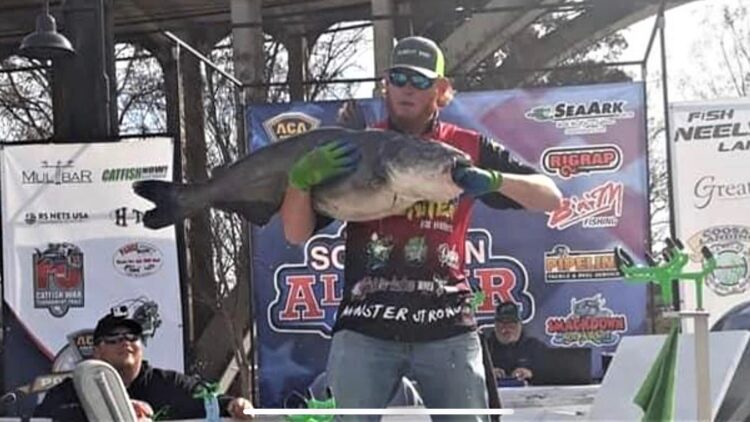 The Southern All-Stars Catfish Series kicked off its tournament trail on the Coosa River and Lake Neely Henry. The March 19, 2022 tournament was hosted by Greater Gadsden Area Tourism. The event is an American Catfishing Association (ACA) Division 1 tournament.

Mother Nature had pounded the area with an abundance of rain in the days before the tournament. The anglers were all challenged by tough fishing conditions, including high winds on tournament day.

“We knew that the Coosa River and Neely Henry lake had great catfishing,” said co-tournament director Mark Johnson. “We also knew that it was unknown waters to many anglers. There had never been a Division 1 catfish tournament on that body of water., but we knew that there were many large catfish to be caught. When the opportunity to visit came around we decided to go for it.”

The Boat numbers were a little disappointing as they did not reach the numbers that the organizers wanted. Nevertheless, given that this was the first tournament for the Southern All-Star Series it was quite respectable. The 33 boats that registered and fished out of Coosa Landing did extremely well with all but 5 bringing fish to the scales. Dock talk following the event was already focused on next year.

The top spot of the inaugural Southern All-Star Catfish Series went to the Cocoa Kid Catfishing team of Cody Haynes (The Coosa Kid) and Cody Chambers. They brought a 3-fish limit weighing 88.95 pounds that include Big Fish of the tournament at 50.7 pounds. Their day’s strategy was the right one to earn the first-place check of $5,500. 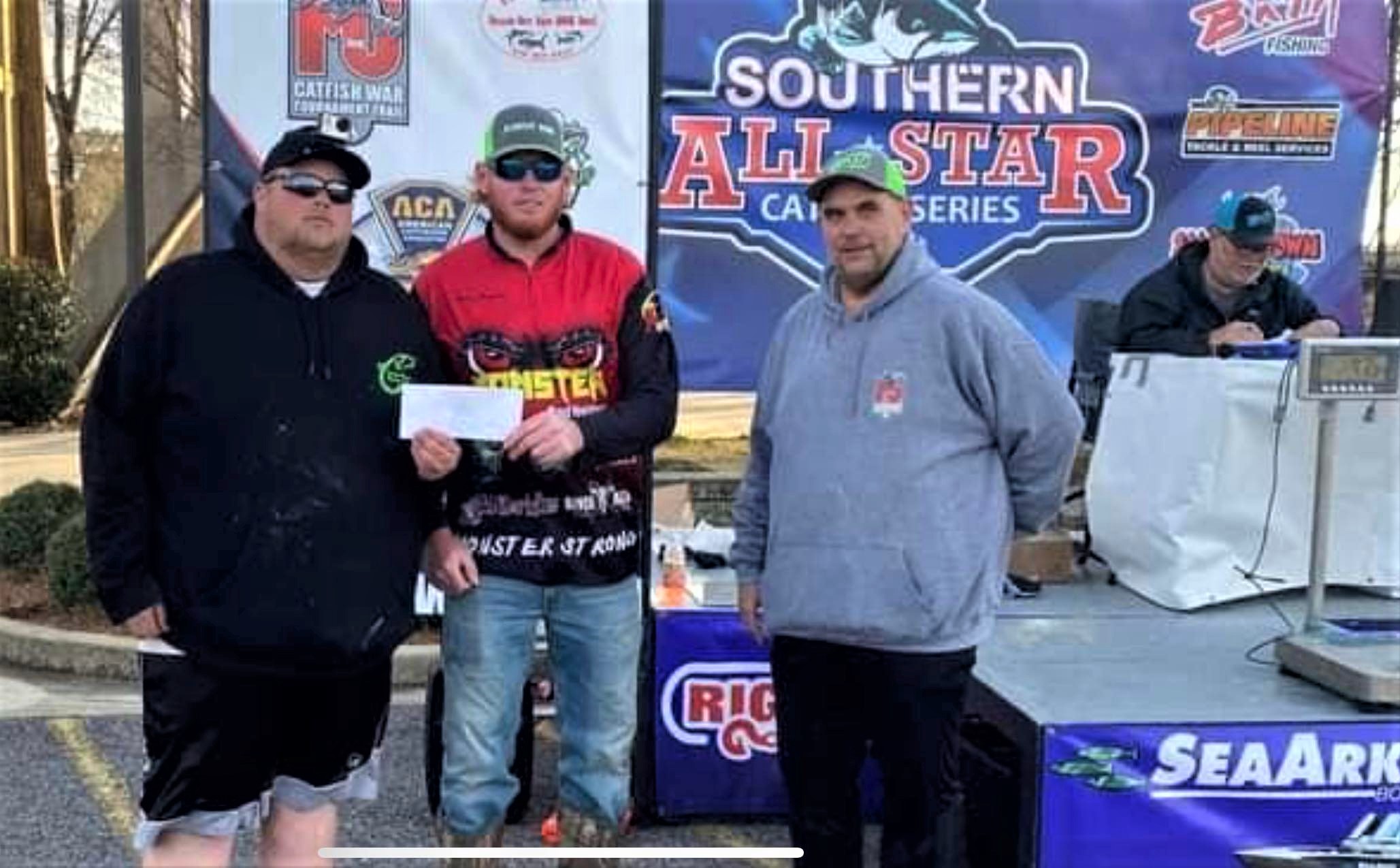 Conditions preceding the tournament included a lot of rain which resulted in muddy water. The Coosa River and its tributaries were running hard and high.

“We had a lot of rain in the week of the tournament,” verified Haynes. “It had the main river and the creeks high and muddy, I know the blues tend to hang out around creek mouths and in the creeks with those conditions because the shallow muddy water heats up faster than the main river.”

The team fished a creek where they found the water temperature at a cool 57 degrees at 6 am which was the official start time for fishing.

“It was cold and gloomy,” reported Hayne. “We anchored for the first hour but never had a bite. So we decided to make a drag. About 20 to 25 minutes into that first drag we caught our biggest fish of the day.”

The wind was blowing hard out of the west creating a challenge for boat control and was hard on trolling batteries struggling to fight against the high winds.

“I knew my trolling batteries were getting weak,” offered Haynes. “So we decided to move to the very back of the creek.  The creek got narrow in the back and we were able to get out of the wind. We found the fish stacked up in there pretty good. We caught our 2nd over and our under there along with a few more unders. We were using redhorse suckers for bait.”

The bite slowed around mid-day in the creek so the team headed back out to the main river. They fished one spot on a ledge and caught 1 more small under before heading back to the main channel with the idea of trying a few more spots on the way back.

“On our way to the ramp my lower unit locked up,” revealed Haynes.  “After being broken down for about 5 minutes a bass boat came by and helped out. He gave us a tow back to the ramp.”

The breakdown caused the Coosa Kid Fishing team to lose the last 2.5 hours of fishing time. Little did they know that they already had the winning bag in the boat.

“The whole adventure really was a blessing,” added Haynes. “We stayed within 4 miles of Coosa Landing all day. To be honest the conditions were tough but at least for us, the bite was pretty good! We were in the right place at the right time I suppose. Marty and Mark put on a very well-run tournament. It was one of the smoothest weigh-ins I’ve ever experienced. I’m happy they brought an event like that to the Coosa.”

“Overall I want to thank my family, friends, and girlfriend for being so supportive in general with my catfishing,” concluded Haynes. 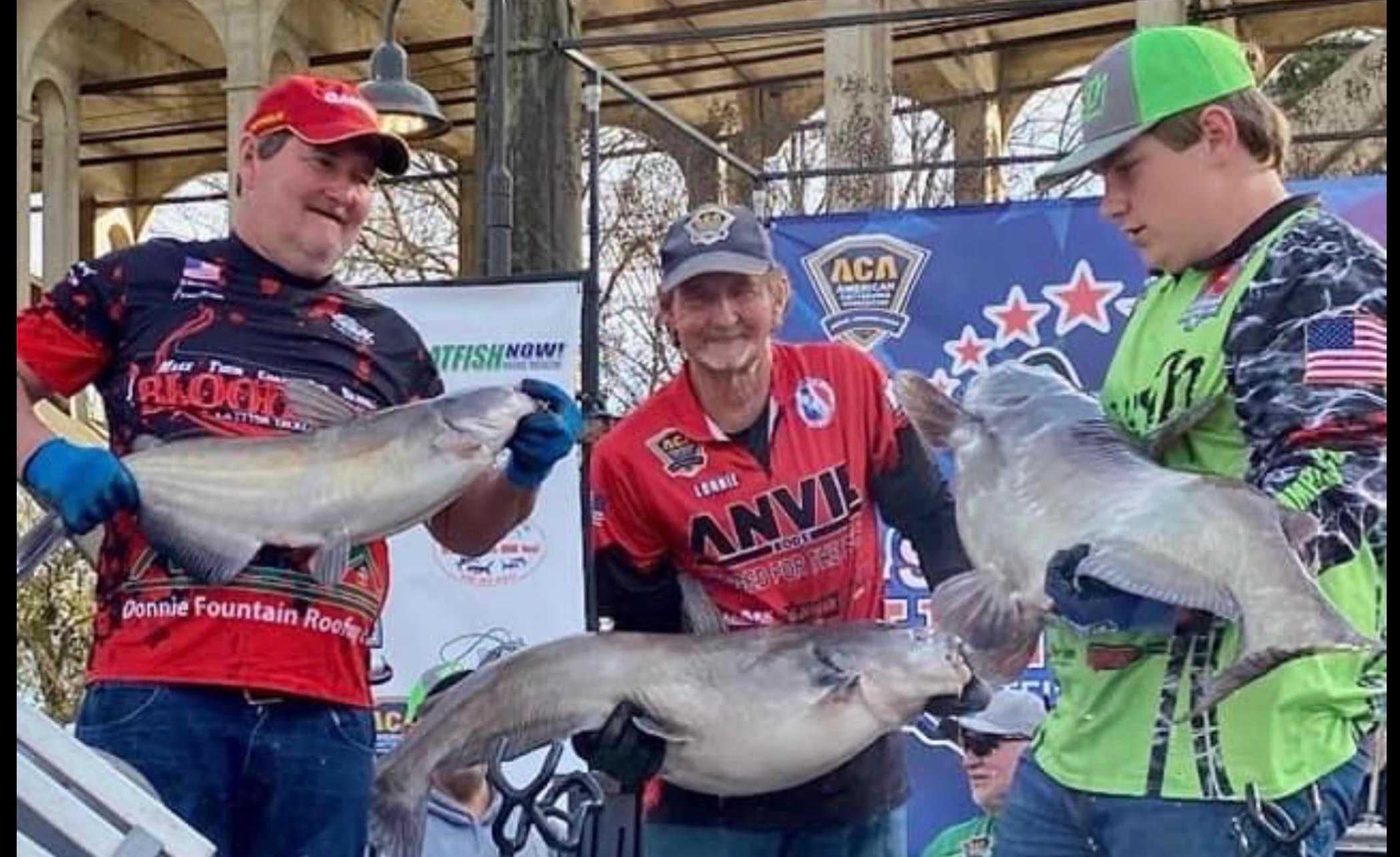 The runner-up spot went to the brother team of Lonnie and Donnie Fountain. The popular Fountain brothers are tough competitors wherever they go. Fishing with them was Chandler Highnote. The team brought a 3-fish weight of 87.35 pounds to the scales to claim second place and earned a check for $3,000. 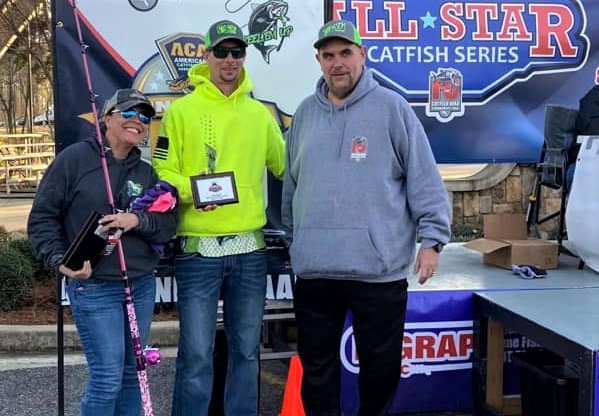 The third-place winners at Coosa Landing was the team of Aaron Churchwell and Robin Allen. They brought a total weight of 84.85 pounds to the scales to earn a check for  $1,500.00. Their bag included a 40.10-pound blue that earned “Bobby” the Veteran Big Fish honors.

The remaining team’s placements and weights can be checked out on the Southern All-Star Catfish Series Facebook page.

Blake is also featured in an article in the February issue of CatfishNow where his dad, Bandon Sasser, answered the question “Why We Catfish.”

“In our opinion, the first Southern All-Star Catfish Series event was a resounding success,” Johnson said. “We only had 5 boats that decided not to weigh in which means the vast majority of the boats (28) weighed in.”

“Julie Tucker with Coosa Landing and Hugh Stump with Greater Gadsden Area Tourism were instrumental in making this tournament a success,” continued Johnson. They worked side by side with us during the Captain’s Meeting and on Tournament Day.”

Even though Highnote and Johnson had run a successful trail (M&J Catfish Wars), they described the new venture as a learning experience. Stepping up to a Division 1 tournament offered them new challenges.

“This event was new, different, lots of work, and exciting,” said Johnson. “We thankfully had a lot of help in the transition. Having a live feed weigh-in was probably the biggest obstacle to overcome. Neither one of us had any experience with that before. With a lot of patience and coaching from Glen Thomas and Chris Ramsey, we managed to get it all setup and work through the glitches.”

“We received many compliments and thanks from the anglers for bringing a tournament to the Coosa River,” concluded Johnson. “They are already asking about next year.  That feedback alone made all the hard work worth it!”

The Southern All-Star Catfish Series is now looking forward to the next event. It will be staged at Scottsboro, AL. Teams will launch out of Goose Pond Colony Resort on Guntersville Lake. Mark your calendars for May 14, 2022, and join in on the fun. Guntersville is known as a trophy catfish lake and with the May date, a lot of big flatheads are likely.