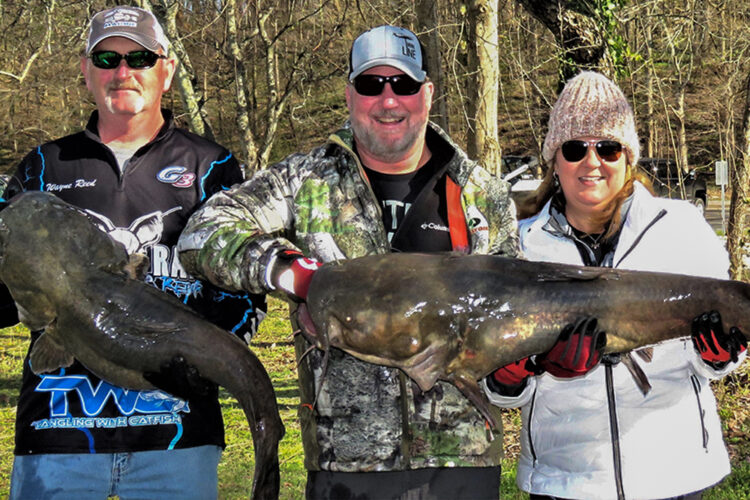 Veteran Mark Patterson (center) and his wife Diane (right) from Tampa, FL pulled off the win at
the Spring 2022 Warrior Catfishing Contest. They were hosted by volunteer captain Wayne Reed.

Thank You for Your Service

The mission was staged on Wilson and Wheeler Lakes in Alabama to honor those who served and sacrificed for our nation.

It all started in 2019. Kevin Breedlove, a veteran himself, began bringing wounded warriors together to fish and mix with other veterans. Patriot Catfishing INC. builds upon the camaraderie and brotherhood that grows naturally between those who have served their country and extends it to the water. Breedlove uses the pursuit of trophy catfish as his modus operandi. It is his way of giving back.

The most recent event, the Patriot Catfishing, INC. Spring 2022 Warrior Catfishing Contest took place out of Rogersville, AL. The warriors gathered at the Cotton Gin at Robertson Farms. Often a venue for blushing brides or corporate get-togethers, the Cotton Gin was a great place to kick off the weekend by gathering the visiting veterans and volunteer boat captains for food and conversation.

The participants began arriving around noon. They were assigned lodging arrangements and fed if they were hungry. Those who wanted to fish that afternoon were provided boats and captains to try their luck before returning to the Cotton Gin for dinner and a captain’s meeting. Fishing began at first light the next morning with a weigh-in at Safety Harbor Boat Ramp beginning at 4:00 pm on Saturday. The event is described as a friendly competition.

The anglers were greeted on Saturday morning by a cold and windy March day. It was challenging, but 29 warriors hit the water with their host captains and most of them caught fish, many catching the biggest fish they ever caught in their life. There are many stories to be told from these experiences. I followed up on three boats and found similar experiences in each case. It was a combination of recreation and education.

Mark and Diane Patterson traveled from Tampa, Florida to join the other warriors and fishermen. Mark retired from the special forces after 20 years of service.

“I spent 20 years in the army,” said Mark. “It was a great career. I have known Kevin (Breedlove) for a while. We really enjoyed the fishing. It was relaxing and my wife was able to bring in a beautiful blue catfish on our first day out.”

“I am not too strong,” added an excited Diane. “It gave me a pretty good fight.”

Notably, spouses of vets are just as deserving of recognition and honor as the vets themselves. Diane served 20 years with Mark supporting his army career. She got slimed when she caught an eater-sized blue on the Friday afternoon trip with their host, Wayne Reed.

Little did they suspect at that time that they would be the overall winners of the Saturday Catfish Contest among the vets.

Matt suggested that he was not really a catfisherman. He discovered some new techniques of catfishing while relaxing and just having fun. He was pleased to be attending the event with his wife.

“If I catfish I am bottom fishing, not trolling like we did today,” explained Matt. “I am used to just throwing out blood bait and waiting for the bite. I learned a lot today. Wayne has an advanced setup and once you get it all going it is very hands-free. The planer boards are keeping everything separated while the angler runs the line out the right distance.”

“That’s 8 rods you know,” continued Matt. “I learned that everything has its place. The boat is very efficient once everything is set out. We never had any tangles, even with the wind.”

“We missed a fish on one of the planner boards,” joked Mark. “Wayne thought that fish was a good one. I think we have him marked for tomorrow.”

Their Friday fishing was characterized with mild weather. Saturday was a different story and they would have to use a different technique. The winds kept them from returning to the area where they lost the big fish.

“The weather changed drastically,” recalled Reed. “With the high winds we went to another part of the lake and I was able to show them my waypoints and how to set up on them. They learned how to use the electronics to measure the distance to rockpiles or other structures and how to put bait in front of it.”

“My goal was first and foremost to have a fun safe day on Saturday,” said Reed. “We didn’t catch our first fish until around 1:30 pm. Mark caught a small flathead and the emotions went through the roof. Just a few minutes later Diane caught a bigger flathead. To say that they were excited is an understatement.”

When the competition was over Matt and Diane had won the friendly competition with a 2-fish total weight of 78.60 pounds in a bag that included a huge 51.64-pound flathead.

Justin Grell is active duty military from Ft. Campbell where he is a helicopter mechanic. He not only volunteered his boat for the occasion, but he also provided the other volunteers with fresh bait. His guests were Charles Graham, Tom Flannery, and Reece Brown.

“I did some homework in the area a day prior and we caught some good fish,” reported Grell. “Then we were able to get all three guys on fish. There were a lot of smiles. They learned a lot too because none of them had ever fished with planer boards. I got to teach them everything from hook style, rigging, drift speed, the use of drift socks, and landing trophy fish.”

While talking with Graham about his Patriot Catfishing experience, I discovered that he is an army vet and Purple Heart recipient. He admitted to learning a lot about catfishing at the event but at the same time identifies camaraderie as the most significant part of the occasion.

“I am originally from NC and we have catfish in the Cape Fear River,” shared Graham. “But they are nowhere near the caliber of these Wheeler fish. I caught the biggest catfish I ever caught in my life today. It weighed about 30 pounds. It was a beautiful catfish. It was long as my leg and I am only 5 feet 8 inches tall.”

Graham suggested that Grell was not only a good guide, but he was also a good teacher.

“I had a fantastic time fishing with Justin Grell,” said Graham. “He is a fantastic guide and he knew some of the hotspots because he has fished here before. We drifted today and he taught me a little stuff about catfishing that I never did before in my life. I learned a lot today.”

“After spending 22 years in the Army, I can tell you this,” said Graham. “I enjoyed the fishing a lot but the camaraderie I had with some of these gentlemen was the most significant part of the event.”

Graham was referring to his angling partners for the day and the other vets he socialized with at the event. He specifically mentioned Tom Flannery.

“I actually got to fish with a Vietnam vet,” Graham said. “He is old enough to be my father or my grandfather but he and I built a relationship on the boat. He opened up with some of his experiences in combat. And he heard some stories about me being a Purple Heart recipient and what I experienced.”

“You know what, we had a lot of respect for each other,” continued Graham. “This man came down from Philadelphia. I didn’t know him but I got on the boat with him, Reece, and Justin, and we had a great time. He was the first one to get a fish on and at about 80-years-old he reeled that thing right on in.”

“It was great listening to each vet tell their own stories,” said Grell. “From the moment they got on the boat until the moment they got off they never stopped. Mr. Tom is getting up there around 80, so the ages ranged from 30 to 80. I am on active duty so I got to tell them a story about right now and what my military story is. Their stories stretched way back to Vietnam with Mr. Tom.”

Ryu Tea is active duty Army serving at 5th Special Forces Group (Airborne). He is a 35G, which is a Geospatial Imagery Analyst. He was one of the vets that opted to go out the first afternoon. He jumped on the boat with Malachi Mayuric and as luck would have it, he caught the biggest fish on that Friday afternoon before the welcoming dinner. He came to the event specifically to learn more about catfishing.

“My main motivation for entering the event was to learn and garner experience in fishing,” shared Tea. “I have fished on my own but lacked the knowledge of the best ways to fish. It has always been a skill I wanted to develop and the Patriot Catfishing event was a perfect opportunity for me.”

He said that he learned numerous techniques and general knowledge about catfishing and the best methods to fish for them. He also learned that catfishing is a lot of fun but like most of the other participants, he recognized socializing as most meaningful.

“The most significant thing about the event for me was meeting the community,” said Tea. “It was establishing connections with others with similar backgrounds who also enjoy the sport.”

“I noticed the big smile on Tea’s face and how long it stayed there,” stated Mayuric. “That smile made it all worthwhile. He told me that he was so overwhelmed with the experience and his big fish that he was going to get a catfish tattoo because his blue cat was over 60 pounds.”

The Patriot Catfishing, Inc. Spring Fishing Contest for vets was a huge success. The organizers were honored to have 29 veterans participate in what they described as a “friendly catfishing competition.” They succeeded in thanking 10 more veterans this year than they did in the Fall 2021 event. The organizers were pleased with the growth and the opportunity to say thank you once again.

There was an equal number of boats to take the veterans out and put them on some trophy catfish. Numerous other volunteers assisted with cooking and other duties. Every angler caught fish and a majority of them caught their personal best. New friendships were made and some of the veterans already have plans to come back and fish with one of the volunteer captains again.

Patriot Catfishing Inc. is headquartered in Pleasant View, TN, and is a 501(c)(3) organization. EIN: 85-1516338. Donations are tax-deductible. The IRS NTEE classification code is W30, Military, Veterans’ Organizations within the Public, Society Benefit – Multipurpose, and Other category. The IRS ruling year for tax exemption was 2020. For more information follow them on their Facebook page and visit their website.