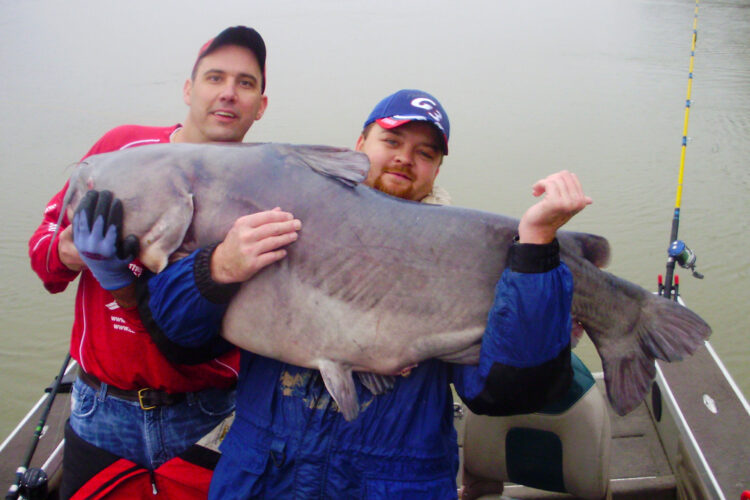 Want to catch a monster catfish like this? Winter is prime time at hotspots that include Alabama’s Wheeler
Lake where Joe Ludtke (left) landed this 102-pounder in February 2010. (Photo courtesy of Mike Mitchell)

You should definitely put these destinations on your itinerary when planning a catfishing trip this season.

If you had mentioned cold-weather catfishing just a few years ago, most fellow anglers would have thought you crazy. “Catfish in winter? You must be kidding.”

In recent decades, however, whiskerfish fans have learned that some of the year’s best action for blues and channel cats takes place when water temperatures drop to chilly extremes. And as more anglers fish during the cold months, we discover more great places to enjoy blue-ribbon winter catfishing. These lakes are among the country’s best.

In recent years, Wheeler Lake, a 67,100-acre Tennessee River impoundment in north-central Alabama, has been one of the country’s hottest blue-cat lakes, producing several fish around 100 pounds and scores exceeding 70. Fishing is good year-round, but winter fishing excels, as evidenced by the clients of guide Mike Mitchell who have caught some true monsters then, including a 98-pounder in January 2008 and a whopping 102-pounder in February 2010.

Bring a boat if you like, but for the best in cozy, cold-weather catfishing, fish from one of the heated fishing docks on this 12,900-acre lake 22 miles southeast of Muskogee. For fees ranging from about $2 to $5 a day, anglers can try their luck in heated comfort around indoor fishing wells floating over sunken fish attractors. Some docks have bait, tackle and even hot food service.

The Palmetto State’s Santee-Cooper reservoirs—lakes Marion and Moultrie—have been known as superb winter catfishing sites for decades, and the capture of the largest blue catfish ever landed on rod and reel there solidifies this reputation.

On April 1, 2017, Paula Haney of Anderson, SC reeled in a 113.8-pound state-record blue cat while fishing in Lake Moultrie. Both the Santee-Cooper lakes have been churning out monster blues since the species was first stocked more than 50 years ago, including a 136-pound, 6-ounce trotline-caught fish in 2012 and a 109-1/4-pound former world-record in 1991. Many local anglers say the best time of year for hooking a monster is the dead of winter when the largest fish gather in deep wintering holes or cruise shallow mussel beds to feed.

Hefty channel cats swim in abundance here, too—some exceeding 20 pounds. The world-record 58-pounder was pulled from Moultrie in 1964, leading to speculation there may still be monsters waiting to be caught.

Just 35 miles east of Dallas, this 36,700-acre Sabine River impoundment serves up sizzling winter catfishing. Cheese and blood sponge baits fished in 12 to 14 feet of water around flooded trees near the lake’s north end often result in daily catches of 50 to 60 1- to 3-pound channel cats this season.

Winter blue-cat possibilities are exemplified by the lake-record 87.5-pounder caught February 15, 2014. That fish ate a cut shad bait, a standard here for these heavyweights. Live and cut baits both produce, especially when drift-fishing along channel drops.

Tawakoni gives up some monster channel cats, too, like the former lake record, a 29.8-pound fish caught January 7, 2013. A shad bait was the enticement used by the angler who caught it.

This hotbed for giant blue cats and abundant “eating-size” channel cats sprawls across 12,200 acres 40 miles west of New Orleans. A rich food base of sunfish and shad combined with first-rate habitat gives des Allemandes an incredible density of 430 pounds of catfish per acre. In 1980, the state legislature gave the nearby town of des Allemandes the title “Catfish Capital of the Universe.”

Channel cats are targeted by most visiting anglers, with 1- to 5-pounders super-abundant. Catch them bottom-fishing with night crawlers or stinkbaits around timber anywhere in the shallow lake.

Blue cats lurk around “sinkers”—piles of cypress logs left on the lake bed during early logging operations. Live shad and shad cut-baits presented near bottom on slip-float rigs are the best enticements for trophies, which frequently weigh up to 75 pounds.

This 40,000-acre Corps of Engineers impoundment west of Hot Springs National Park gave up the current 38-pound record channel cat, and there’s little doubt it could harbor even bigger ones. It may also be the most overlooked body of water in the state for trophy-class blue cats. Several pushing the 100-pound mark have been caught recently, and for several years now, the Game and Fish Commission has been removing 70-pound-plus blues from around its net-pen fish-rearing operation there and stocking them in smaller lakes around the state. Savvy anglers can expect to land some monsters.

If you fish during winter, you’ll find Ouachita practically devoid of other anglers. But despite the huge reservoir’s tranquil nature this season, the extremely clear water (Ouachita often is called the Cleanest Lake in America) can make catfishing tough. Locals often go at night, even when it’s cold, and they know big cats are likely to be found in extremely deep holes and ledges, mid-lake reaches in open water, dense piles of down-deep woody cover and subtle, hard-to-find structures along creek and river channels. Cut-shad baits are the ticket to success for most trophy hunters.

(They don’t call him “Catfish” for nothing. Keith Sutton of Alexander, Arkansas not only serves as editor of CatfishNOW, he’s also the author of Hardcore Catfishing, a 179-page full-color book full of great information. To order an autographed copy, send a check or money order for $22.95 to C&C Outdoor Productions, 15601 Mountain Dr., Alexander, AR 72002.)