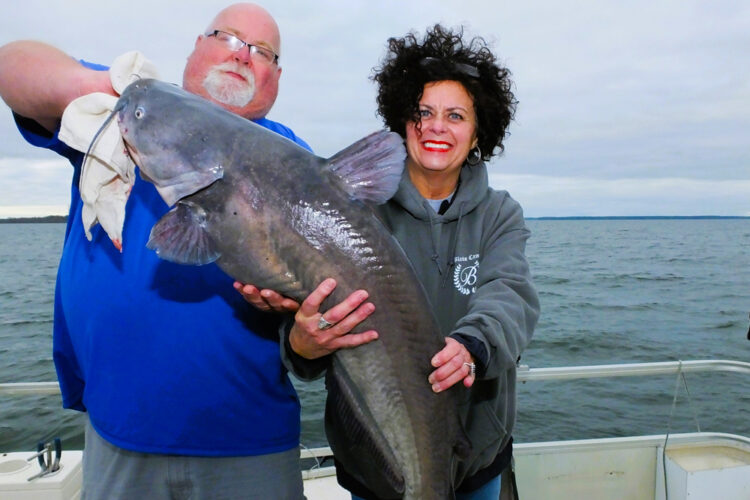 Catching fish is always a priority with Team Sellers, but fun and fellowship enhance the experience.

Team Sellers: A Blend of Fun, Fellowship and Catching Catfish

Catching fish is the primary goal of catfish anglers, but the fish-catching experience is enhanced by embracing the opportunity to add fun to this already rewarding process.

Sunrise arrived unnoticed on a cool, heavily overcast morning on Lake Marion in South Carolina. Our guide positioned his 30-foot pontoon boat to wind-drift over a series of humps and holes in the lower end of the lake, and with the Santee drift rigs deployed, it was time put pen to paper and discuss strategy with Capt. Eric Sellers.

But when a rod on the bow arched three-eyes-deep into the water, that plan changed. The reel sang that special drag-squealing song, the telltale signature of a broad-shoulder blue catfish on the business end of that fishing stick.

I auto-shifted from writer to photographer, grabbed my camera and scanned for the best angle to capture the event in pixels. But no one was manning the fish-loaded rod.

“Put the camera down, you’ll need both hands for this fish,” she said.

It was perhaps the politest command I’d ever received, and my keen sense of the obvious regarding who was in charge prevailed. I handed the camera off in quarterback-to-halfback-manner and engaged that bulldog blue in a tug-of-war.

“Our guests always take the first fish,” she said. “It’s the rule, but don’t lose this first fish because another rule states I’d have to toss you overboard.”

I did glance to ensure she was grinning. She was, but I still felt the pressure.

After a close call with an underwater stump, the blue was slid into the net, and the day was off to a great start.

And the day got even better, even if that was our biggest fish. The sun broke through the clouds, the air temperature warmed, and we caught a bunch of catfish.

With order restored, Eric was scanning his graph, and Shannon was patrolling the front of the boat, keeping her eagle-sharp eyes on the rods. She was audibly chatting to the catfish, but that’s fine because it seemed to work as fish bit with amazing regularity.

And she did let me take photographs.

Capt. Eric Sellers (704-477-0846) comes from strong lineage of the family business of catfishing expertise at the Santee Cooper lakes. His father Gene was a catfishing guide, and his uncle, Big John Sellers, earned status as a catfishing legend.

“I grew up catfishing these lakes, and the core of my strategy was passed down from my dad and uncle,” Eric said. “I’ve refined those tactics to fit my style of fishing, but I’m still fishing out of Uncle John’s boat.”

Sellers said his cold-weather strategy is similar year-round in that catfish chow is the number-one ingredient, combined with speed and depth controls.

“I like to fish underwater humps and holes during winter,” he said. “I’ll keep one eye on the graph as we drift. I focus on finding forage and fish marks that hover slightly off the bottom, usually a sign of active fish. Forage pods that appear to be flared in irregular shapes are another sign that fish are actively feeding.”

Capt. Sellers mentally marks the depth at which fish are hooked to formulate the pattern.

“When a bite occurs, it’s not where the boat is that counts. It’s where the bait is located,” he said.

Like many fishing guides, Sellers shares his fishing profession with another passion.

“I’m also a pastor at Blacksburg-Eastside Baptist Church in North Carolina, and I’ve found the two to be complimentary,” he said.

Being a pastor and a fishing guide is a perfect professional blend for him.

“Both are about people and enjoying interactions with them,” he said. “On the boat, Shannon and I provide opportunities for fishermen to be successful by providing the tools, instructions and coaching. We’re goal-oriented, and a favorite moment for us is netting someone’s personal best catfish. That translates to working as a preacher, too. Helping others become better and reaching goals.”

Shannon Sellers serves as first mate as often as possible, and she’s earned the moniker of “Admiral” aboard their boat.

“I love catfishing and the people associated with it,” she said. “Eric and I are people-oriented, so it’s a natural fit. We’ve named our boat Visitation, which represents the fun we have. It keeps me honest with church members, too, because when someone calls for Eric while he’s fishing, I can truthfully say he’s out on Visitation.”

And another “bless his heart” is added to his resume.

“People want to catch fish, but patience is important because we’ll need to sort out the fishing pattern,” she said. “Then folks can catch lots of fish. Sometimes I get worked up when we’re getting bites, and fishermen snatch circle hooks out of the fish’s mouth before the fish loads up.

“It’s hard to watch it happen repeatedly, and, recently I had to ask Eric’s permission to tell a fisherman the rule about missing three fish in a row,” she said. “That rule is three strikes and you walk home!”

Capt. Seller’s said one conflict does exists between his chosen professions.

“I know of three professions where a person can lie and keep their job, and that’s politicians, weathermen and fishing guides,” he said. “I work hard to stay on fish so I can tell the truth.”

Team Sellers exudes passion about catching catfish while enjoying the process, and it’s contagious to all those aboard the aptly named vessel Visitation. Sharing the camaraderie typical of the catfishing community as a whole, one trip at a time, is a worthy goal.

Whether someone’s needs are piscatorial or pastoral in nature, Team Sellers can make it happen.

But remember those rules.